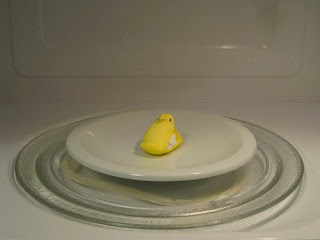 It's spring once again, which means it's time for Peeps! I went to CVS yesterday and found a shelf of them, so of course I had to buy some. They're not really good, supersweet and vaguely soapy. But they're cute and I like them anyway.

I realized after I bought them that I'd never tried the microwave experiment. So I placed a sacrificial Peep on a plate and placed it in the nuker. Below is the result. 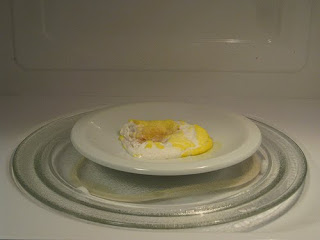 I took a video to document the Peeps' inflation to the size of a large softball. But the door of our microwave is somewhat opaque (partly because, let's face it, it's somewhat dirty), so the video didn't really work. Suffice to say the Peep swole* up, and then deflated into a burned puddle.

I must be releasing my inner teenager!

What a disgusting blob of Peep goo! Please don't tell me you ate it or worse yet fed it to Ruby or Ernie. I think you have far too much time on your hands, Steve...

Oh, no, we didn't eat it, and neither did the dogs. I definitely have too much time on my hands! I freely admit it!

I believe the word you are searching for is swolded up. Okay that's two words. "Peeps"? Not for me thanks, but Mrs. Sneed loves them.

steve, its time for a road trip when you are left to nuking peeps!

and what's with all the colors these days, have they always come in blue, purple, orange, and pink????? I haven't bought peeps since em was a little girl, but when I was visiting my folks my ma made a trip to the drug store which was having a sale so she could buy some peeps to send to the little (young) grandkids - so I got a quick refresher of the world of peeps and there are now peeps that aren't even peeps! what is the world coming to!

I don't remember eating a peep--do they really taste like soap? yikes. I do know that they made in Pennsylvania but are shipped to China to be wrapped, because it's cheeeeper.

But I fail to understand the appeal of peeps. I just don't get it.