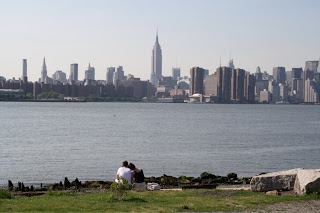 For a few years now I've been keeping track of openings, closings, demolitions and cultural shifts in New York via various blogs, including Jeremiah's Vanishing New York, EV Grieve, and Neither More Nor Less. Recently, the NMNL blogger decided to hang up his press hat, and another New York blog called Lost City has also come to an end. Ironic, but also reasonable, that the blogs that chronicle the changes in the city -- some would say its death -- themselves have finite life spans.

Reading the parting letter by the author of Lost City makes me think about the changes I've seen in New York since moving there, just ten years ago. Ten years doesn't sound like a long time, but judging from the altered cityscape, it is.

When I first visited Manhattan in the mid-90s, I was impressed by its apparently vibrant mom-and-pop business community. Streets were lined with tiny shops and diners that were clearly family businesses, many with old neon signs and lunch counters lined with barstools. How they survived up to that point, I have no idea, but they were comforting. New York seemed to still bear traces of its "Breakfast at Tiffany's" past.

As rents rose through the next decade, many of those businesses were obliterated. I already wrote about the demise of the Palladium diner, which always comes to mind when I think of departed places I loved. Other diners followed suit -- the Skyline on Lexington Avenue, the Cheyenne on Ninth, the Moondance on Sixth, and now the Empire on Tenth.

And the movie theaters! When I moved to New York, it was still a city of tiny theaters with two or three screens. Many of the small theaters have since been razed and moviegoers are more likely to find themselves in suburban-style multiplexes with stadium seating. Places like the Beekman, the Coronet and the Sutton have been turned to rubble. (I wrote about the similarly endangered Cinema 1, 2 & 3 back in August 2006, but it remains open.)

I have mixed feelings about changes like these. On one hand, all cities change and evolve. Many businesses vanished before I got there, and many more will continue to depart. But I do feel like New York lost something during the past decade. It no longer feels like the city of Holly Golightly, chic but penniless in her Givenchy. It feels more like the city of Paris Hilton -- glittery, glassy, expensive and characterless. Some of the new buildings are quite beautiful, in an abstract way, but they don't have the accessibility and charm of my old favorite diners. Because I'm not wealthy, many of them I couldn't even enter.

I did try to patronize small businesses in my old neighborhood -- the Lord John Bootery, where I bought my shoes, for example. But I've also drunk a lot of Starbucks, so I'm hardly blameless.

So now, here I am, newly moved to the suburbs and looking back at my own Lost City. Maybe I'm just getting old.

(Photo: On the Brooklyn waterfront, last Tuesday.)
Posted by Steve Reed at 12:21 PM