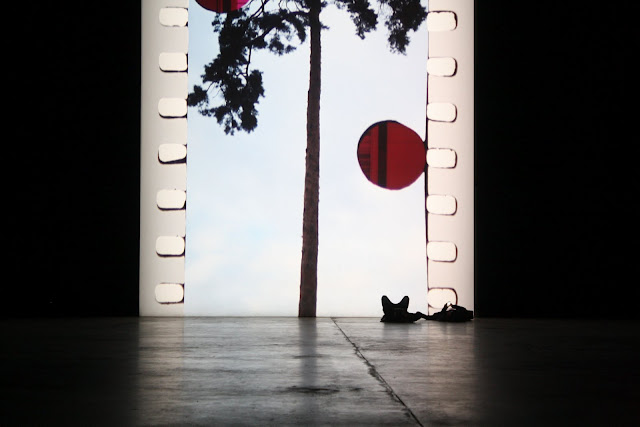 When Liz, Sally and I went to the Tate Modern on Thursday, we watched an exhibited film by the British artist Tacita Dean in the museum's vast Turbine Hall. The film, simply called "Film" -- how's that for minimalism? -- feels, according to the museum, "like a surreal visual poem, including images from the natural world among others."

It's silent and includes black & white, color and hand-tinted images that have been cut and manipulated. It was interesting to watch, and seemed to me a melange of both the natural and industrial -- leaves, girders, volcanic cones, windows. I couldn't begin to say what it's supposed to "mean," though.

The film is projected onto a white monolith at the end of the Turbine Hall that's supposed to recall the monolith in "2001: A Space Odyssey," according to the museum website.

Seating was available many yards away from the screen. But when we were there, two guys were lying instead on the concrete floor beneath the monolith, watching the film close-up. One seemed to be recording it on his iPhone. (It's funny how people seem to automatically record or photograph things around them now, almost as if that's the only way they can really see them. I'm guilty of that too!) Anyway, I liked the way the huge film dwarfed the two guys on the floor.
Posted by Steve Reed at 7:58 AM