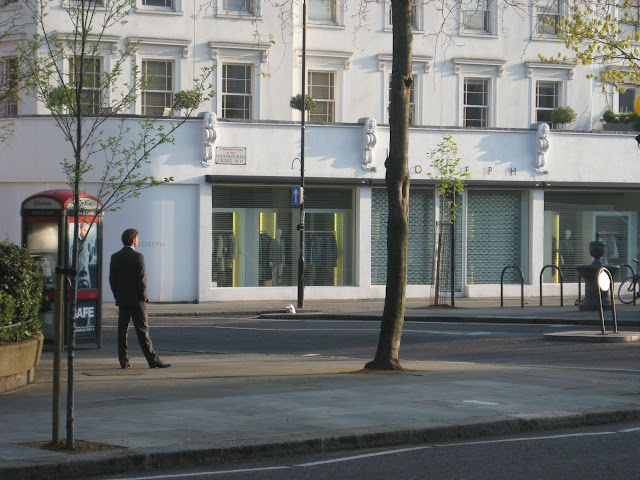 Twice this week, soon after Dave has left for work, I've heard the clop-clop-clop sound of horses on the road outside our window. And not just one or two -- a whole herd of horses. I've run to the window just in time to see 12 of them proceeding eastbound on Westbourne Grove, lined up in pairs and bearing riders in green vests. I have no idea who they are. Police? Military?

This morning I went down to the street thinking I'd sit out on a bench and wait for them, but they never showed. Maybe this is just one of several routes that they sometimes take on their morning constitutional, or maybe they don't ride every day. It's 42 degrees out this morning, so after half an hour I came back inside.

Fortunately, it's clear and sunny -- but the forecast calls for thunderstorms, with a 70 percent probability of rain. Maybe later today I'll be glad I got outside, even if I froze my tuchus.

Dave and I watched "Monty Python and the Holy Grail" last night, a perennial favorite. I needed the laughs after Dave played me a video that his father sent him of Dennis Prager speaking at a Colorado university. I hadn't heard Prager before -- he's a right-wing radio host -- and he was talking about American exceptionalism, how America is far superior to Western Europe (and no doubt, everyone else) as mankind's best hope. Isn't that sort of swaggering nationalism exactly what's led the U.S. into fruitless conflict all over the world?

(Photo: This morning, on Westbourne Grove.)
Posted by Steve Reed at 7:41 AM

That movie never fails to lift my spirits. It's pure silliness. I love it!

If you find out about the horses, will you report here? I'm curious.