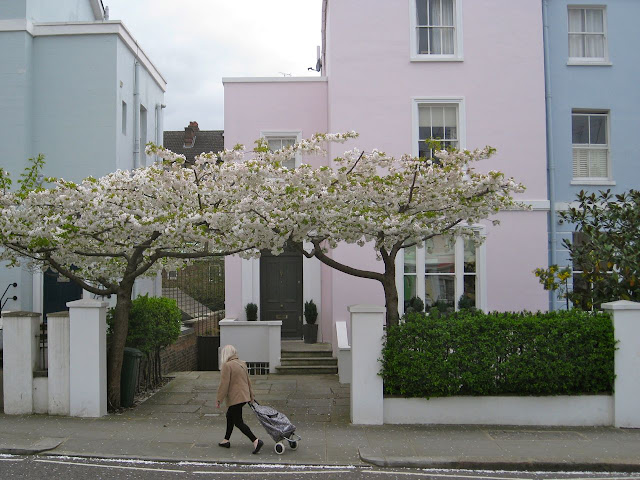 Last night we went to dinner with one of Dave's coworkers, Lorraine. She had just come from a weekend retreat led by Buddhist monk and writer Thich Nhat Hanh, and she was brimming with the new awareness that comes after three days of practice. She talked for more than half an hour about the workshop, which was geared toward teachers and youth workers, and all the things she'd heard that impressed her. You could hear a new quality of mindfulness in her voice and see it in her face.

Being the killjoy that I am, I told her it would all pass. And really, it always does. Whenever you leave a retreat you feel so permeated with calmness, and then you have to go to the grocery store or sit down to pay bills and that calmness begins to seep away. But for me, that's part of the lesson of retreats -- the return to the real world. Re-entry. Impermanence.

Anyway, I began thinking about my own practice. I haven't been sitting at all lately. I went to the local Buddhist center once, back in January, and despite the fact that it's within walking distance I haven't returned. I always think, "Well, I'll go later this week," and then there's always a reason I "can't." I haven't even been doing any reading about the dharma. I suppose at this point I have genuinely lapsed.

I don't mean to be a dilettante. I want to practice meaningfully. So my goal for the coming week is to sit a little, to get back to the Buddhist center at least once, and maybe to find one or two new dharma books to read here and there.

(Photo: Spring blossoms in Notting Hill.)
Posted by Steve Reed at 7:36 AM

I love it that you spoke the truth - that nothing stays forever, not even the calm after a retreat.

You know I meditate every morning. It has been years since I went to a retreat. Maybe I should give it a go again.

I encourage you to sit again, one day at a time. I would be an ax murderer if I didn't sit. OK maybe not that bad. You have lots of natural balance, but still, it's wonderful to sit, to do that kindness for yourself.

You know that already!

I'm not really much of a meditator, but I could certainly stand to add a dose of mindfulness to my days... I'd better make an appointment with myself (be mindful while washing dishes!) or it will never happen.

I like short cuts- so breathing and letting go usually bail me out- sitting rarely does and a retreat is just a holiday- for me, I mean. My friend lives in a Buddhist community
on the west coast- she has lived and worked there for about five or six years now- she is still upsettable, emotional, super involved in the goings on of the community- a replacement for the outside world which is less controllable, I suppose. Just another way of doing things...

You know it is ok to fall off the wagon if you always get back on. :)