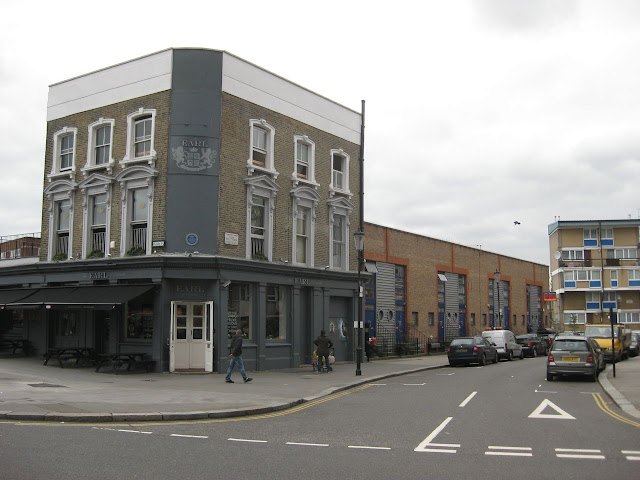 When you hear Notting Hill, what comes to mind? Probably the saccharine 1999 movie, in which a bookish guy played by Hugh Grant becomes a rock of stability for a troubled actress, played by Julia Roberts.

That's the modern Notting Hill, the one with clean, manicured streets lined with gracious Victorian and Edwardian townhouses. The one where upper-crust bankers and their spouses pop in and out of wine bars, and tourists shop for antiques on Portobello Road.

I've been reading a fascinating book called "Murder in Notting Hill," by Mark Olden -- a birthday present from Dave. It describes a completely different neighborhood -- the Notting Hill of the late 1950s, when white working class youths known as "Teddy Boys" made sport of harassing and victimizing West Indian immigrants. Back in those days, Notting Hill was the scene of race riots that made international news.

The book centers on the murder of Kelso Cochrane, a 32-year-old black carpenter from the Caribbean island of Antigua. Cochrane was walking home from the hospital late one night in 1959 when he was attacked by a group of about six white youths on a street corner (above) and stabbed in the heart. The murder was never solved.

Olden examines the police investigation -- as well as he's able, given that the investigative files are still closed to the public -- and considers both possible suspects and the official response to the murder. He settles on one suspect in particular whom others have identified as the killer -- a man who is himself now dead. And he concludes that the police and government may have deliberately thwarted their own effort to find the killer, in order to avoid further conflict and more rioting.

It was a great read for me, because I know all the locations mentioned in the book. The corner where Cochrane was killed, for example, is right across the street from a site that later became Trellick Tower, one of my favorite local haunts for photographing graffiti. Today there's a plaque marking the location, above the door of the corner pub once known as the Earl of Warwick, where far-right politician Oswald Mosley gave anti-immigrant speeches. 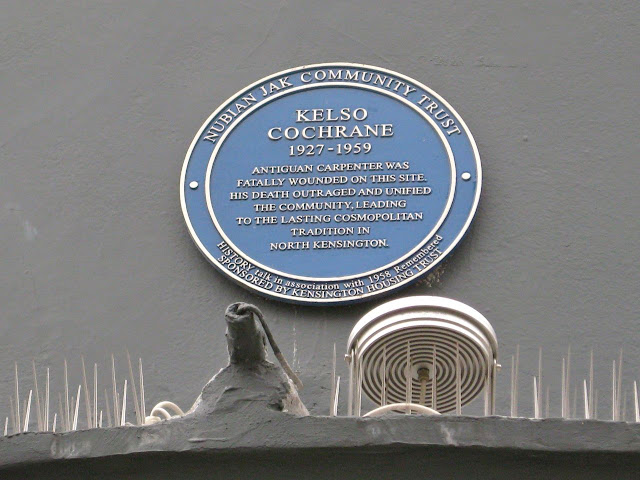 Cochrane is buried in Kensal Green cemetery, a walkable distance from our flat. And the book mentions many local streets, where working class whites and West Indians lived in uneasy proximity for many years. After I finished it yesterday morning, I took a walk and checked out many of the locations -- a few of the pubs still exist, for example, as does the townhouse that served as the headquarters for an Aryan supremacy league back in the day.

One of my favorite passages in the book describes a street corner off Ladbroke Grove that in 1958 was three feet high with rotting garbage. You'd never know it now. Like many of the areas described in the book, those squalid slums were razed and redeveloped by the local municipal government in the 1960s and '70s, and turned into more modern public housing.

I knew that Notting Hill had a checkered past. The Notting Hill Carnival is an outgrowth of that earlier racial tension; even now, West Indian immigrants and their descendants add a multicultural flavor to the area. But walking through these streets today, past Paul Smith and Ralph Lauren boutiques, it's hard to imagine what went on here five decades ago.
Posted by Steve Reed at 7:15 AM