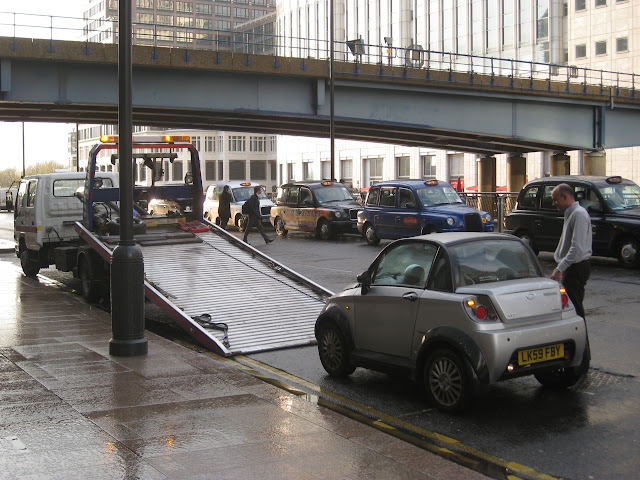 I spent all day yesterday out with Marilyn and Jason. We went to Greenwich -- they were wary of going themselves, because the route demands a few transfers on the tube and light rail systems, which can seem daunting. So I tagged along, and we went to the Maritime Museum, the Royal Observatory and the old naval college.

It was a day of unexpected surprises and absurdities. We stumbled onto a huge movie set at the naval college, with extras wandering around in military costumes suited to Revolutionary France. Someone asked what was going on, and one of the extras said they were filming "Les Miserables." So keep an eye out for the movie -- and if you see a bald guy wandering around in the background wearing jeans and a lime green Merrill jacket, that's me. (I was prohibited from photographing the movie set, alas. It included a huge statue of an elephant, which left us very perplexed.)

Then, in Canary Wharf, we saw this gigantic tow-truck (above) preparing to load this tiny, tiny car. Overkill! 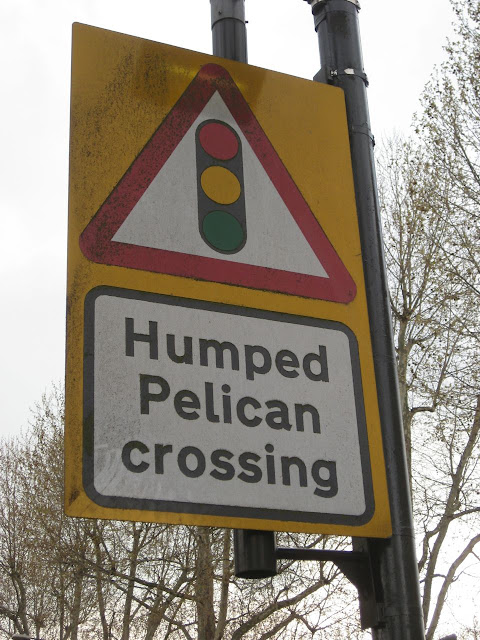 We spotted this mysterious street sign, and wondered whether it was a special crossing for some bizarre species of waterbird. Only via Google did I learn that a pelican crossing is just one of several kinds of street crossings in England named after animals. I'd heard of zebra crossings, which involve stripes painted on the street and so are self-explanatory. Pelican, on the other hand, is a clumsy acronym for "pedestrian light-controlled crossing," which just means a crossing with a stoplight. And humped just means that, in this case, the crossing is on top of a speed hump.

A colorful name for something very, well, pedestrian. 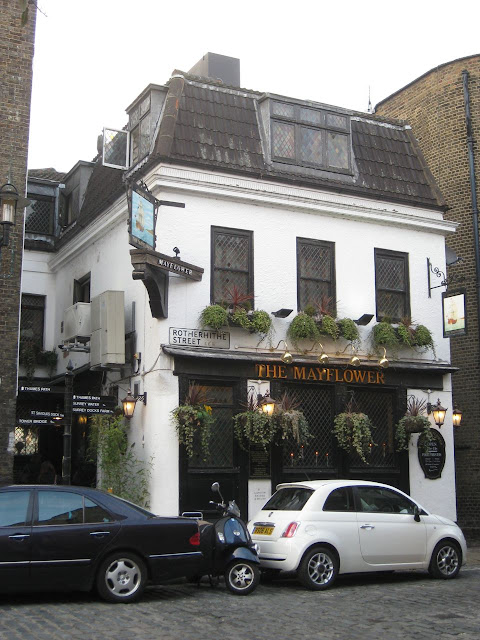 After all our wandering in Greenwich we met Dave here, at the Mayflower pub in Rotherhithe, where we had a few pints and dinner. The Mayflower bills itself as the oldest pub on the Thames, dating back to the 17th century. It has great atmosphere with views right on the river, and the ales were good. (Not that I'm an ale expert.)

Today Marilyn and Jason are stopping by for brunch before heading out to the airport and home to New Jersey.
Posted by Steve Reed at 7:15 AM

Great sign and that pub/inn looks amazing. You're so fortunate to have this time there -- I have to say that I envy you your wanderings!

I so envy your day! Your photos of the absurdities are great and really made me laugh (I would say LOL but I loathe LOL-ers) The Mayflower looks inviting! I just ordered some British pound notes to get us from the airport to our flat May 1st...the dollar is SUCKING! The expenses in London are HIGH! If you see an old lady in American gear begging in front of some Oxfam shop in the heart of London...that would be me.

I have to admit, Steve, you had me going on that title! I enjoyed this sign! Still in the back of my mind I could those little hump-backed pelicans desperately trying to cross the road...

Language can be such a funny thing! I remember when we first moved to France and did not speak French except for a few words. We kept seeing this sign along the road "Don Du Sang" with street directions and wondered why we could never quite manage to find this Chinese restaurant. ;)

That Mayflower Pub looks great. And the sign was enlightening. :)

I love the pelican sign - & yes that truck IS overkill for that tiny car. I'll keep an eye out for the elephant in the movie - ha!