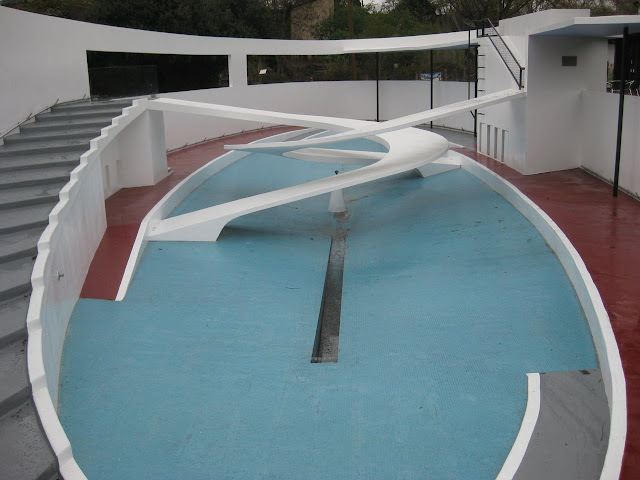 I mentioned recently that our friends Marilyn and Jason from New Jersey were going to be visiting this week. Well, they arrived last Friday and they're going home tomorrow. Part of this week they stayed with us, and we've had fun exploring -- mostly pubs, truth be told, but other things as well.

One of our outings included the London Zoo in Regent's Park, where I'd never been before. On Monday we walked along the Grand Union and Regent's canals all the way to the zoo, and spent an afternoon with the African wild dogs, exotic birds, hungry slow-moving tree sloths and frisky okapi.

At the zoo we found this fantastic Art Deco penguin pool, built in 1932 and now listed as a protected structure. It's not used for penguins anymore -- the zoo has a much larger modern pool -- but they've preserved the old one "for people, rather than penguins," as the sign says. It seems to be just sitting there at the moment. I wonder if they could turn it into a cafe or something? (Not that it has to be occupied. I'm just glad it's been preserved.)
Posted by Steve Reed at 7:49 AM

'protected structure' what a great concept!

i wonder if we'll have time to visit the london zoo in the fall? always hard to choose what to do with limited time, but hearing they have penguins is inviting!

am sure we'll have time for a couple pubs none-the-less!

Ooh, as a penguin fanatic I think this is fascinating. I'd love to see penguins on it too - it looks like a fun place for them.

My mouth is hanging open. That is very cool.

What a fantastic structure! Oh the possibilities.