Living in the Dark 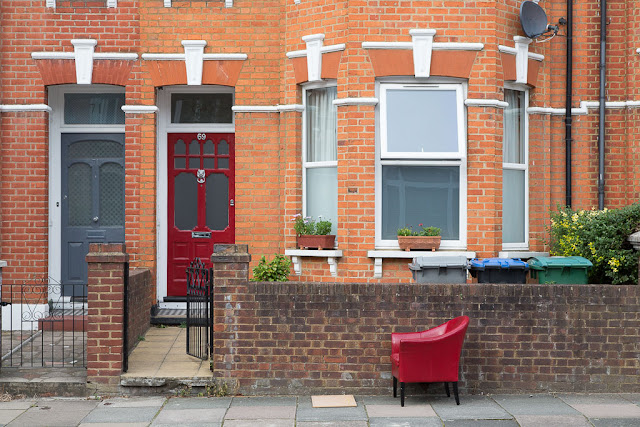 Olga and I came across this lonely chair while walking to Gladstone Park on Saturday. In reality, it wasn't as nice as it looks in the picture -- the seat was cracked and flaking. But I saw at least one person sit in it and give it a try. I bet it didn't stay on the sidewalk long.

Yesterday was pretty mellow. I worked my way through two issues of The New Yorker, including an interesting article about a woman whose skin would "burn" when she was exposed to light -- even the tiniest, tiniest amount of light. Sunlight or bulbs, it didn't matter. She lived her life, more or less, in a blackened room listening to audiobooks. Eventually she wrote a book herself, the event that brought her to the pages of The New Yorker. The author of the article seemed to maintain a healthy skepticism about the woman's story, but he left it to the readers to make their own decision.

It reminded me of one of my coworkers, who prefers to work in her office with the lights off, illuminated only by the glow of the computer screen, dim light seeping through two internal windows, and occasionally a small round IKEA lamp. She's never said her skin burns when exposed to light -- I don't think that's her motivation -- but it's interesting that she prefers that environment. I think she just hates fluorescent tubes, which provide most of our overhead light in the library, and I understand that completely.

Anyway, back to yesterday -- I cleaned the house, including the shower, which I am loathe to do under the best of circumstances. Then I took Olga to Fortune Green and the cemetery, where she got so tired and hot that she plunked down on her belly several times on the walk home. It wasn't particularly hot yesterday, but it was sunny. Sometimes she just wants contact with a cool patch of grass or smooth, shady sidewalk.

Last night we watched a documentary about the peculiar case of J. T. LeRoy, the writer who created a public persona as a teenaged survivor of drug addiction and sexual abuse -- and who wrote two books and made public appearances in that guise -- but then turned out to be a middle-aged woman named Laura Albert. It's a very strange tale. I never bought or read LeRoy's books, but I was dimly aware of "him" while working in New York. Now, though, when I see photos of LeRoy in public, with his blond wig and sunglasses, it seems laughable that anyone ever fell for such a ruse.
Posted by Steve Reed at 6:53 AM