Super Heroes and a Flower-Dog 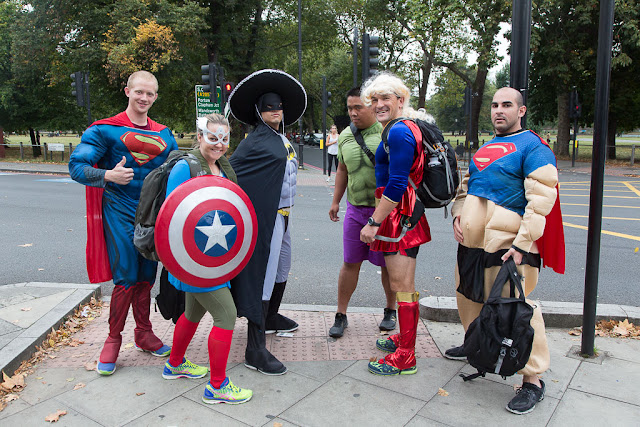 When I went down to Clapham on Saturday to photograph the tube cats in yesterday's post, I ran into this bunch near Clapham Common. They were casually walking across the street as if nothing were amiss.

"We ARE the party," replied Zorro/Batman. They paused for a quick photo and then continued on across the park. 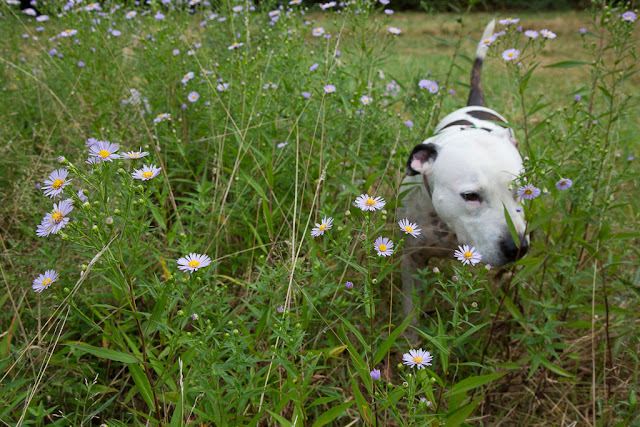 Olga and I had our own party in the park yesterday. We went to Hampstead Heath and took a long walk, even though I didn't feel like walking and in fact felt very light-headed. I think I was just tired. (I slept like a rock last night!) I powered through, and Olga appreciated it -- she ran and ran, and indulged her Flower Child instincts in a patch of asters. 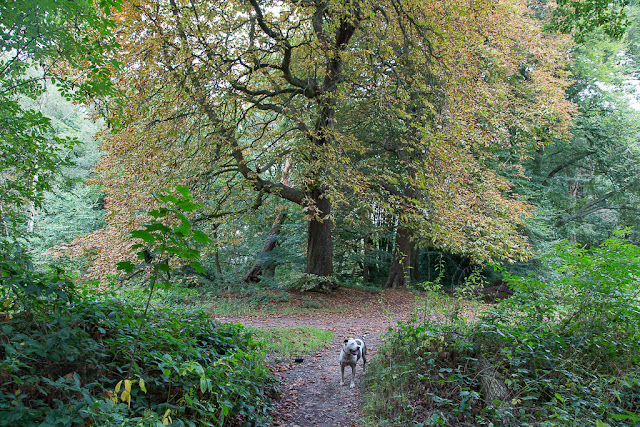 The chestnut trees (or horse chestnuts -- I'm never sure) are changing, their green leaves going curled and dry. They're always the first trees in the forest to start looking like fall.

I finished "Hillbilly Elegy." It was an interesting book, but it didn't answer all my questions. Although the author critically evaluates the behavior and feelings of his "hillbilly" family members and neighbors, and discusses why they act politically out of anger and frustration, he didn't get into why he apparently remains conservative, and religious to boot. I would have thought he, as a Yale Law grad living in San Francisco, might have re-evaluated his own political feelings. He has moderated them, but I'm still vague on how much. He's critical of the ways that government treats extended families, and he's critical of the welfare state, which he believes fosters a culture of dependency and exploitation. I'm assuming that's where his objections lie.

Anyway, now I'm starting a book about garbage, and the disposal thereof. You know how obsessed I am with our garbage and trying to discard things responsibly. I suspect it's going to tell me that everything -- recyclables and non-recyclables -- gets poured all together in a big truck and buried. That's always been my suspicion!

Have you heard the kerfuffle about the Great British Bake-Off, which is abandoning the BBC in favor of another channel offering more profitable terms? The comedians who host it, Mel and Sue, have quit in protest. It remains to be seen what will happen with judges Paul and Mary -- it certainly won't be the same show if they jump ship. But bravo to Mel and Sue for backing the BBC!
Posted by Steve Reed at 6:42 AM