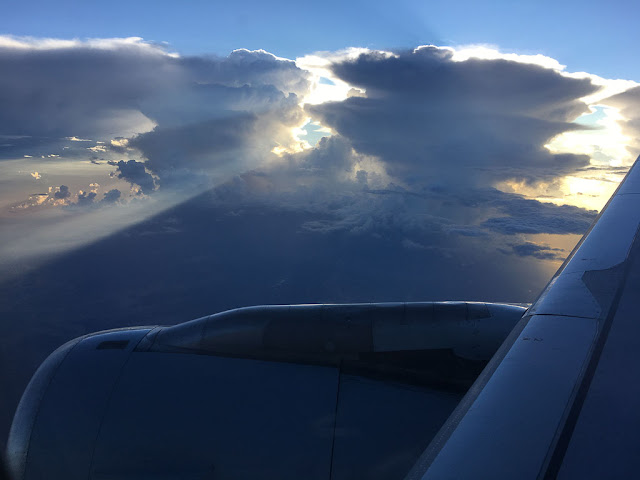 I’m posting a bit later than usual, but of course that’s because it’s 6 a.m. where I am now. I’m sleeping in my 4-year-old niece’s room (she has joined her sister across the hall), and I’m surrounded by colorful plastic toys and school art projects. There’s a papier-mâché horse, and a rainbow-colored spiraling tower — I’m not even sure what it is. I vaguely remember it, maybe from a Christmas past.

I’m glad to finally be here. I flew to Jacksonville via a connection in Charlotte. The flights were smooth enough but we had some delays thanks to thunderstorms around the Charlotte airport. The bad news: delays. The good news: spectacular clouds after we finally took off.

Isn't it amazing to think that when we fly, we see a view of the world that was unthinkable for our great-grandparents or, indeed, any earlier generations? All the millions of people who lived on Earth before the Wright brothers never saw clouds quite like this. 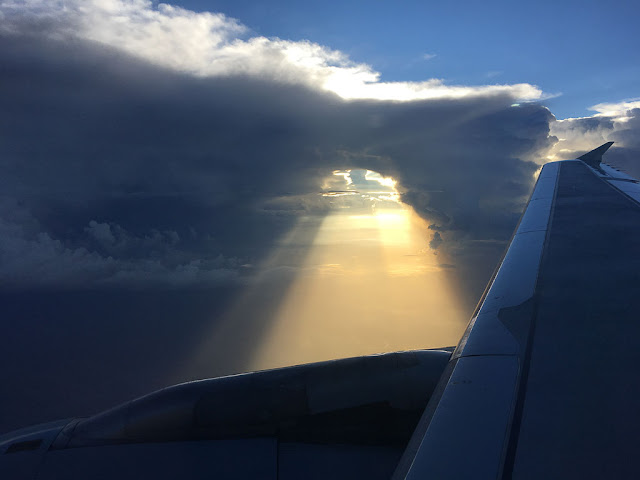 Back at Heathrow, at the start of my transatlantic odyssey, the plane — operated by American Airlines — was apparently so large that it couldn’t dock directly to the terminal. Instead we had to be ferried in buses, and then climb stairs from the tarmac to the door. So retro!

“I feel like Mamie Eisenhower,” said a man next to me on the bus.

“Better than Gerald Ford,” I replied.

I spent all my time on the flight reading, finishing “Gilead” by Marilynne Robinson, which was beautifully written but maybe too religious and philosophical for me, and “Sunshine State” by Sarah Gerard, a book of engrossing Florida-themed essays. I also polished off a New Yorker with a fascinating article by a man whose dentist was involved in a sordid and peculiar extramarital affair that ultimately led to him being accused of murder. 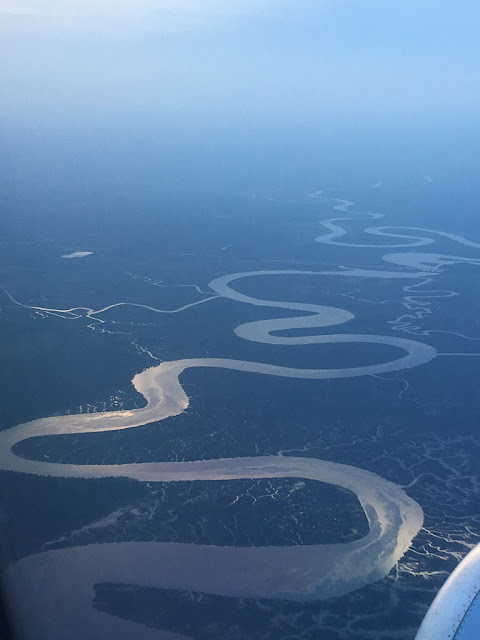 In Charlotte, I had a couple of hours to kill before my flight to Jacksonville. So I went to a restaurant called the Tequileria, or something like that, and had a glass of wine. I amused myself by texting Dave — who reported that Olga was sound asleep in my absence, so I guess she doesn’t miss me — and by watching CNN and listening to the patrons around me. One woman ordered a “double gin & tonic in a short glass,” which seemed strangely specific. I suppose a short glass allows less room to dilute the gin. I don’t know why she doesn’t just order a martini.

And then I got my bill. I ordered a 9-ounce Sauvignon Blanc, which I figured would come to eight to ten bucks. No — it was TWENTY-SIX DOLLARS. I paid it as if I buy wine like that all the time, but inwardly, I was aghast.

My brother and mom met me at the Jax airport last night, and I had just enough time before collapsing into bed to meet my brother’s family dog Queens. (There used to be a Brooklyn, too, but Brooklyn proved to be too rambunctious and had to go live with another family.) Queens and I will get along fine. Don't tell Olga.
Posted by Steve Reed at 10:44 AM