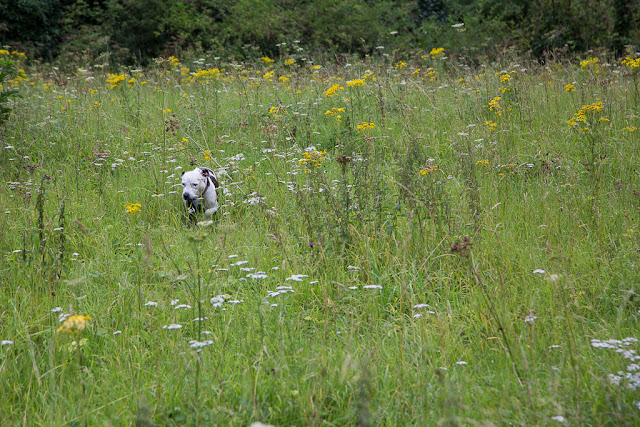 I was walking Olga on Saturday morning when I crossed paths with an older gent, out with his two overfed black labs. We made small talk and he commented that the days are "drawing in," the sun setting earlier each evening as we edge toward fall. And it's true -- last night it got dark shortly after 9 p.m., an hour earlier than a month ago.

I think that's such a wonderful, cozy term -- "drawing in." That's exactly what autumn feels like.

Having said that, it's still pretty darn summery. I took Olga to the Heath yesterday and, as you can see, the wildflowers are still in the meadows. There are lots of interesting bugs still out and about, too. 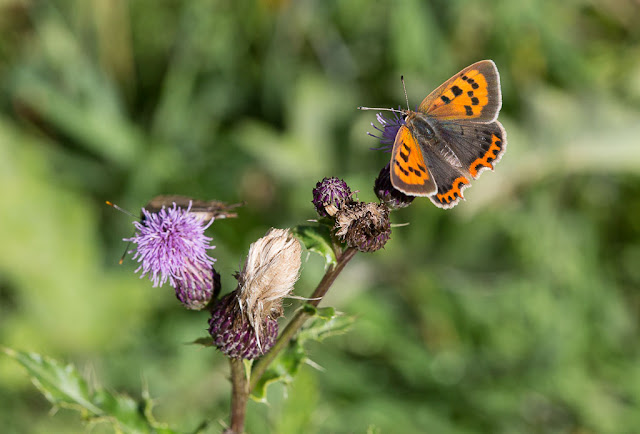 This is a new butterfly for me -- a small copper. 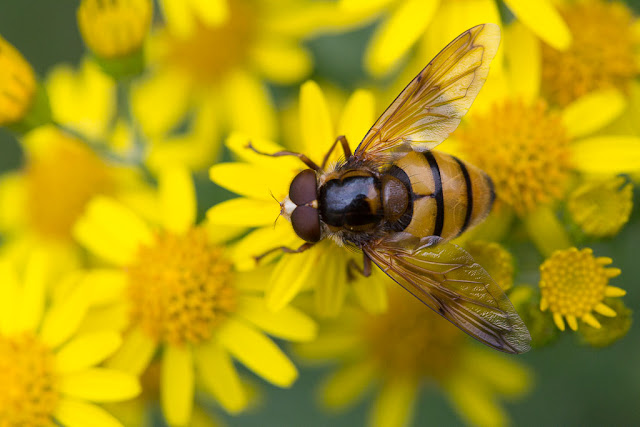 And this is an extra-large hoverfly. I believe it's a Volucella zonaria, which is the UK's largest. Definitely bigger than the ones I routinely see in our garden!

Anyway, Olga and I had a good long walk, involving playing in mud puddles and eating grass and chasing the Kong. (Olga did some of those things, too.)

Speaking of the Kong, quite a while ago -- as you may remember, because I'm sure I wrote about it, but I can't find the post now -- one of her Kong toys was stolen from our back garden. We left it out in the grass overnight and in the morning it was gone. Very peculiar! Well a couple of nights ago, the same thing happened again. I could kick myself, because I saw it lying out there before we went to bed, back by the never-used barbecue grill, and I considered bringing it in, but I took the lazy route. We think another animal takes it. Possibly a fox? It no doubt smells like Olga and they may be attracted to it.

It may sound minor but each one of those stupid toys costs £18, so I'll go to great lengths not to lose one.

We had some crazy, schizophrenic weather yesterday. It would be sunny one moment and drizzly the next. The sky would cloud over incredibly fast. I hung some clean towels out in bright sunshine, and had to run and retrieve them not half an hour later. British weather keeps me on my toes!
Posted by Steve Reed at 7:11 AM