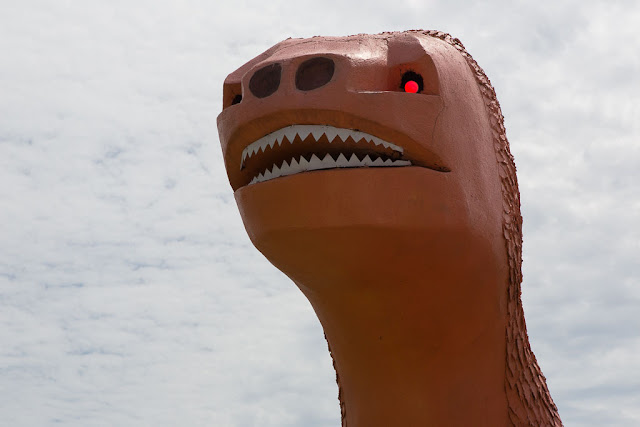 Yesterday morning, Mom and I went to the Jacksonville Arboretum, a large forested tract with some botanical plantings. I thought our little walk there might be a miserable experience in July, but it actually turned out to be fairly cool and mosquito-free and not at all uncomfortable.

We adjourned afterwards to Red Lobster for lunch, at Mom's request. As we were driving to the restaurant we passed a big orange dinosaur standing in front of a shopping center.

Well, I turned the car right around. How could I not?

"I bet this came from an old mini-golf course," I told Mom as I prepared to photograph it. I looked it up later, as we sat in our booth at Red Lobster, and I found this article. It explains that, sure enough, this dinosaur's home used to be Gooney Golf, and it's stood in this position for about 45 years. When the golf course was torn down, there was a local effort to save "Sexy Rexy" (one of several names proposed for it), and now it is enshrined in front of a strip mall. 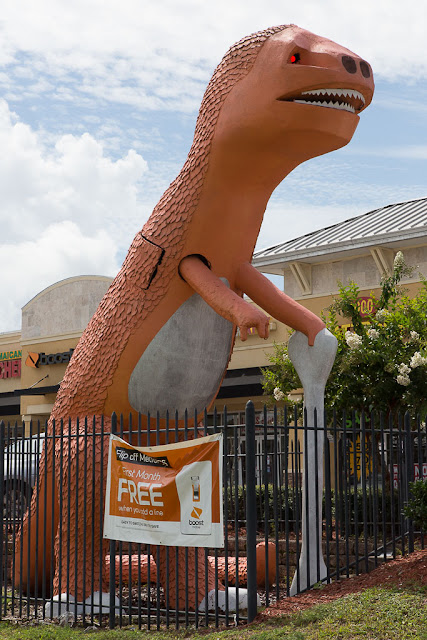 It stands on Beach Boulevard at Peach Drive -- yes, the corner of Beach and Peach. I am not making this up.

Anyway, as we drove home, we stopped at Target to replace my mom's toilet brush, which I inadvertently broke while cleaning her bathroom. The cheap plastic handle snapped in two! Clearly I don't know my own strength. So I got a super-strong one with a metal handle.

As we pulled out of the shopping center, a man in front of us was putting up the automatic top on his convertible, which looked pretty precarious. We joked that it might fly off and kill us as we drove, leaving us the subjects of a news story: "MOTHER AND SON KILLED BY FLYING CAR ROOF. 'They just bought a very expensive toilet brush,' a witness said." 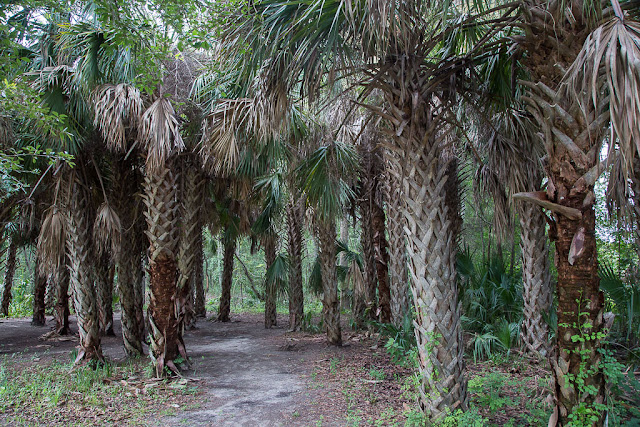 It can be fun to imagine yourself the subject of news coverage. The day before, having a beer with my brother in his back yard, an afternoon thunderstorm blew up. As we retreated inside we imagined the headline: "BROTHERS IN IDENTICAL 'WAFFLE HOUSE' T-SHIRTS KILLED BY LIGHTNING STRIKE." While drinking cans of beer, no less. That would be a Florida story.

We had dinner with my brother and his family last night (barbecued brisket sandwich!), and now today I'm getting ready to take flight for England. I've got to do a lot of hanging around in airports -- I'll try to avoid another $26 glass of wine, but there are no guarantees. When I come to you tomorrow, I should be back in Blighty with Dave and Olga.

(Bottom photo: A grove of palms at the Arboretum.)
Posted by Steve Reed at 11:44 AM