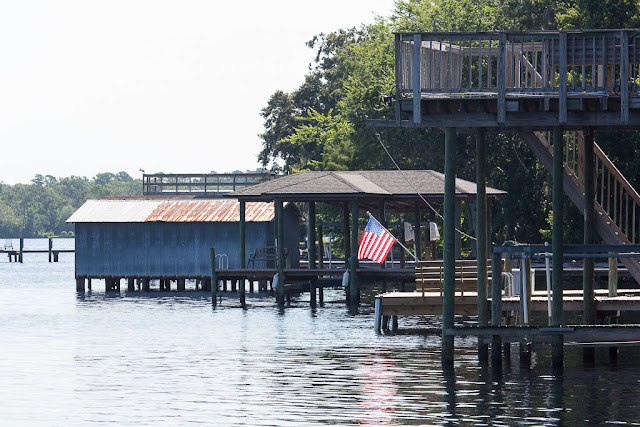 We're staying indoors these days to avoid the heat. I did convince my mom to take a short walk after lunch yesterday, mostly under shady trees or walkway canopies at the senior center where she lives, but that was about all the exercise we could manage. There were three or four panting waterbirds in the pond, and a couple of people buzzing around in golf carts, but otherwise signs of life were few.

We had lunch with some of Mom's pals. There were four other women at our table -- as at many senior centers, women seem to outnumber men -- and one of them ordered a grilled-cheese sandwich from the cafeteria kitchen. (Apparently it takes special preparation.) Well, the sandwich was slow in coming, and it became the sole topic of conversation. I swear, those women talked about that sandwich for half an hour.

I never learned their names, because Mom wasn't sure about them. I suppose I should have introduced myself, but as long as they know I'm her visiting son -- and not a home invader or a gigolo -- that's the important thing.

In the afternoon Mom and I were reduced to watching "Leave it to Beaver," which I don't think I've seen in about 35 years. Last night after dinner I tried to be more hip and watch "Fantastic Beasts" with my nieces, but I was so tired I only made it about two-thirds of the way through the movie. I became the stereotypical middle-aged uncle, nodding off on the couch, loosely clinging to his glass of wine. (Well, actually, I'd finished the wine by that time.) I totally get why parents turn on the TV, though -- the kids quiet right down.

Queens continues to express her affection for me with puppy love bites. Fortunately she mostly nibbles me, though -- not any other family member. I think when I leave she'll be back to her better-trained self.

(Photo: Docks on Julington Creek.)
Posted by Steve Reed at 11:19 AM