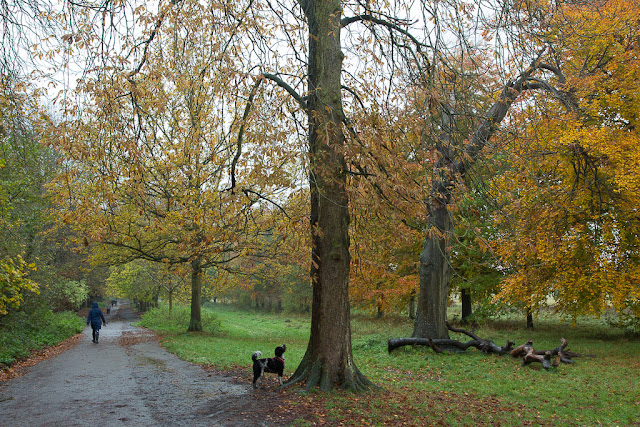 I completed most of two more segments of the LOOP walk yesterday. It wasn't the best day for walking -- gray and rainy -- but I had to seize the moment because the train station where the walk began, at Banstead, doesn't have service on Sundays. So it was Saturday or nothing, and because I have some busy weekends coming up, it was pretty much now or December.

I began walking on Banstead Downs, where I had to navigate a golf course (the golfers were out yesterday too, despite the rain, and one of their balls landed worryingly close to me) before walking through a suburban neighborhood to Nonsuch Park (above). 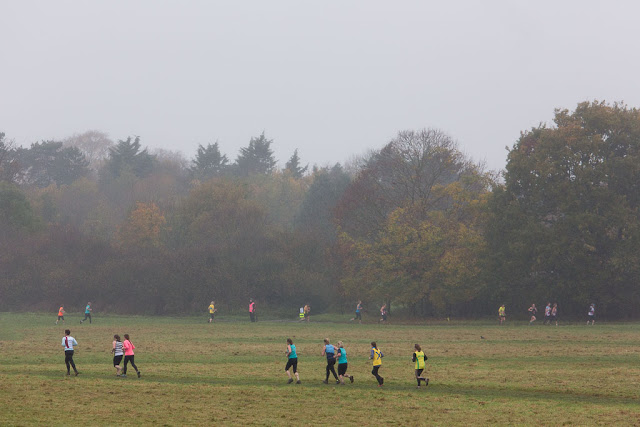 There was some kind of foot race going on in the park, with a lot of cheering and people running a path that seemed to circle a field. Apparently the park is known for its "Park Runs," and I suppose this was one. 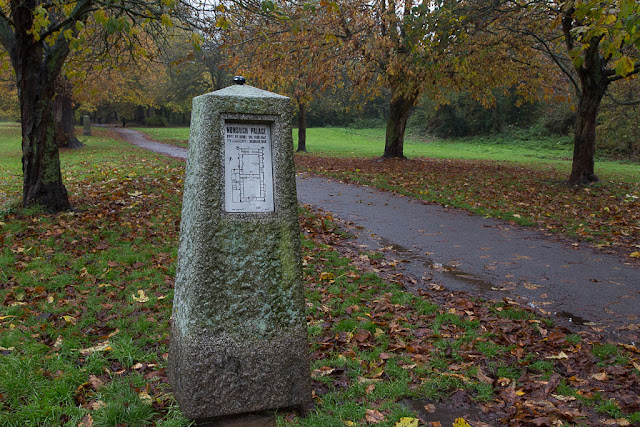 Nonsuch Park is home to Nonsuch Palace, or what's left of it -- which is, precisely, nothing. Henry VIII began building Nonsuch Palace in 1538, and it was supposed to be without equal in Europe. But he died nine years later, before its completion, and it passed through several owners, apparently growing less and less grand with every passing year. Finally, in the late 1600s, it was torn down and sold off piecemeal for building materials, to pay off the gambling debts of Lady Castlemaine.

There are stone markers along a path in the park showing the former position of the palace and the floor plan. The area was excavated by archaeologists in 1959. 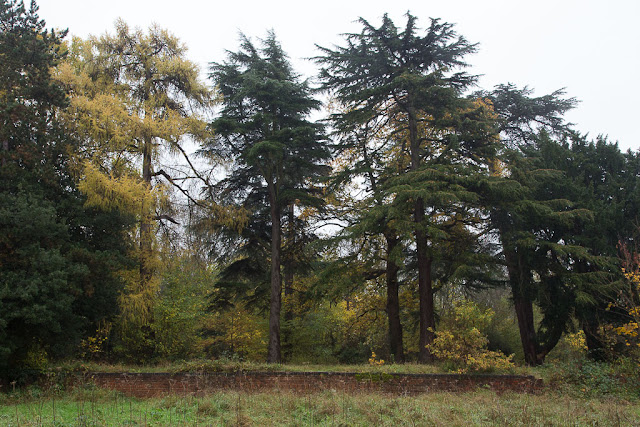 Henry VIII also had a banqueting house in the park -- somewhere in the area of this raised platform, now planted with trees. I'm not sure whether this is an actual remnant of the banqueting house or something else entirely.

Anyway, from here the path passed out of Nonsuch Park and into the town of Ewell, where I walked along the high street and eventually stopped for lunch. 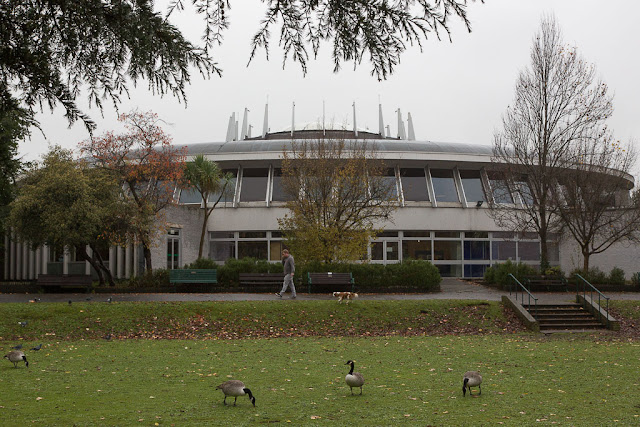 I ate at a cafe in the extremely groovy Bourne Hall Museum and Library, which opened in 1970 and looks vaguely like Space Mountain at Disney World. I was there, eating my cheese-and-onion toastie, just in time for a local official wearing a gold chain of office to show up and pose for some pictures with uniformed flag-bearers and volunteers manning a table for the Poppy Appeal. Yesterday was Remembrance Day, and I wore my own poppy all through my walk. 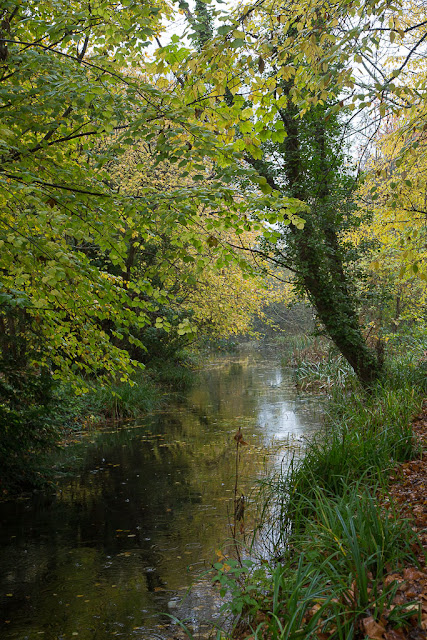 The path led out of Bourne Park and along the Hogsmill River, which apparently was used by painter John Everett Millais as the site for Ophelia's untimely drowning in his famous painting. The path followed the river and although by this time it had mostly stopped raining, the going was muddy and occasionally difficult.

At one point, I'd been slogging along and came to a bridge I was supposed to cross, only to find... 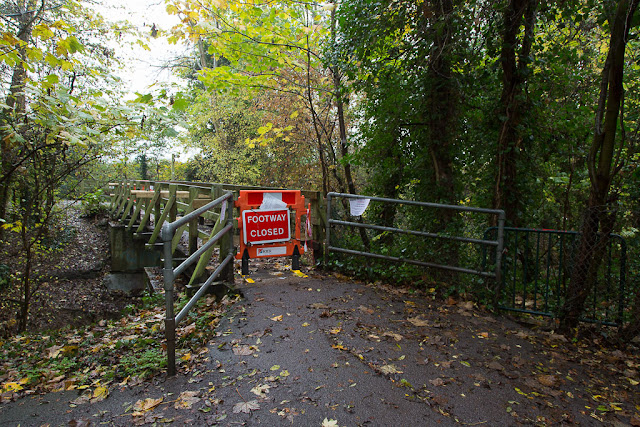 ...this unwelcome surprise. So I had to double back and cross at a point farther upstream, then walk down the other side of the river. (I happened to pass another group of LOOP walkers on the way, so I warned them about the bridge being out, saving them the same slog.)

The path continued on through woods and beside athletic fields through the community of Old Malden. At one point the map gave me a choice of walking through a neighborhood or continuing along the river -- and I tried to continue along the river, but if there was any path to do so I couldn't find it. I wound up hoofing it through the neighborhood. 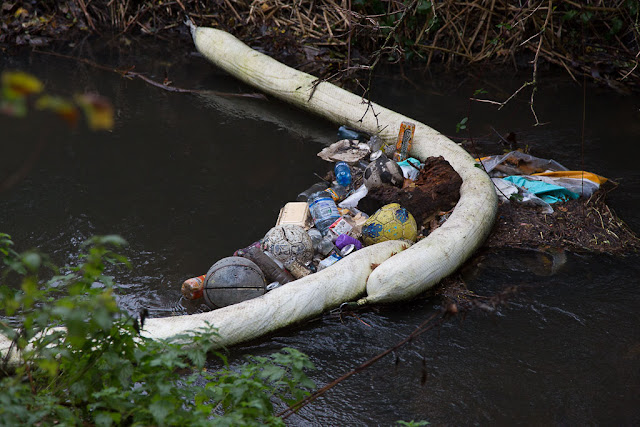 Some parts of the river showed an obvious degree of human impact. There are four balls in that trash!

Anyway, this LOOP segment continued onward all the way to Kingston, but I bailed a bit early in Berrylands, where there was a train station. I was muddy and exhausted, and I'd strayed off the path at one point (the map said "cross the wooden footbridge," and I did so, but it turned out to be the wrong wooden footbridge) so I wound up walking a bit farther than expected. I'll go back to Berrylands -- where happily, I believe there is train service on Sundays -- and pick up the path another day!
Posted by Steve Reed at 7:58 AM