Bears, Dogs and an Untamed Horse Well, I made the mistake of looking at The New York Times before writing this post, and now my brain is full of information about the latest school shooting and Reince Priebus' description of Donald Trump as a headstrong horse. And what can I say about any of it, really, except that America still needs to address its gun addiction and stop making excuses for its dimwitted, dangerous leader? And this whole thing about Trump's lawyer paying $130,000 in hush money to a porn star -- does anyone really believe those were the lawyer's own funds, as he insists? What lawyer does that?

Robert Mueller, your mandate is expanding.

I just can't believe that the same Congress that made such a stink about Bill Clinton is going to sit idly by while these revelations come tumbling forth. And what about all those evangelicals who support Trump? How can they justify that support now? WWJD indeed!

On the personal front, I'm happy to report that my back problems have improved greatly. I don't know whether it was the massage that made the difference or what, but I felt pretty much normal yesterday and I slept through the night both last night and Tuesday night -- a welcome change. Dave keeps telling me I should get a massage regularly, and maybe he's right. Now that I've found a massage place I like, that's not out of the question. 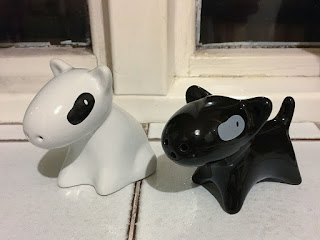 I got a request to say more about these little critters that live on our kitchen windowsill, visible in yesterday's photo. They're salt and pepper shakers, and there's not much of a story behind them, really. I saw them in a shop in the Brussels train station (of all places) several years ago and bought them. They weren't expensive. We don't actually put salt or pepper in them. They're just decorative.

I tried to figure out who produced them -- there's no visible manufacturer name -- but I had no luck. I did find, however, a pair for sale on eBay. First come, first served!

As I sit here on the couch in the pre-dawn darkness, drinking my morning coffee, I'm hearing a bird singing brightly outside. Another sign of the changing seasons!

(Top photo: Mama, Papa and Baby bear outside a garage in Hampstead -- along with a rooster, for some reason.)
Posted by Steve Reed at 6:42 AM