Hairy Dogs and One Big Rodent 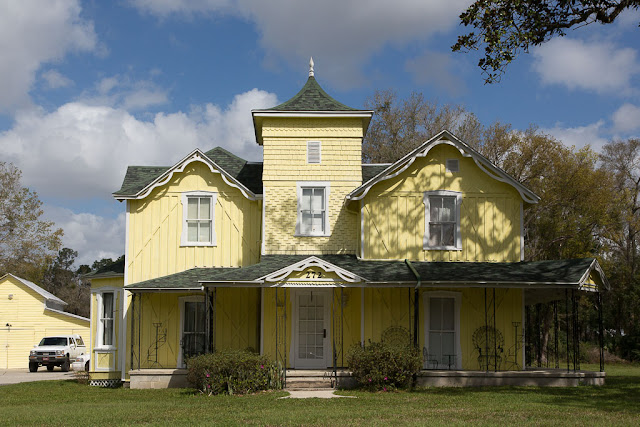 I had a long, leisurely drive yesterday from Jacksonville to Orlando to Bradenton, where I stayed last night with Dave's parents. It was a longer drive than I would have liked, honestly, but I hit some traffic and made some detours -- for photos, naturally!

North of Orlando, an area I don't know very well, I decided to explore the tiny communities of Lake Helen and Cassadaga. Lake Helen had some beautiful old homes (above). 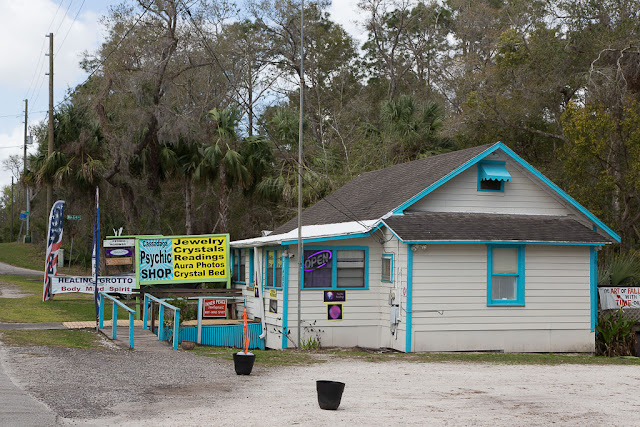 I've been curious about Cassadaga for years. It has a reputation as a New Agey place full of spiritualists and mediums -- apparently this goes back to the 1870s, when a spiritualist camp began there. I had friends who went there on road trips from college back in the '80s, but being a skeptic, I'd never been. I can report that there's still an abundance of palm readers and psychics and crystals. 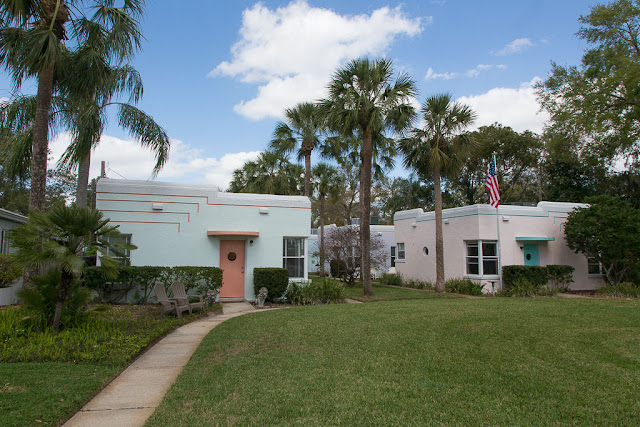 From there I drove to Orlando, where my friends Lynn and Glen live in an older neighborhood that I have always envied. (Yes, Orlando existed long before The Mouse -- although The Mouse transformed it from a sleepy Central Florida citrus town into the entertainment behemoth it is today.)

I met Lynn at her house, where I cuddled (not that I had a choice) with her three yellow labs, Ember, Persimmon and Rupert. Persimmon in particular was in my lap immediately. They were very sweet dogs and they covered me in dog hair.

Then we went to lunch at a neighborhood cafe and walked around Lake Davis, where the groovy little deco apartments above are located. I've long loved those apartments. They look tiny, but they're so stylish! 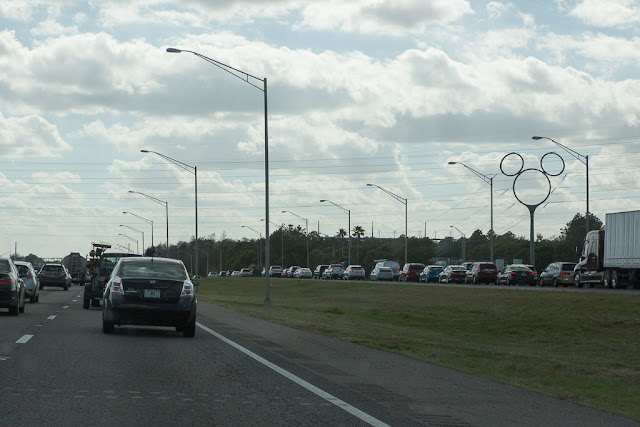 I hopped back in the car and headed south, where I hit masses of traffic on I-4 around Disney World.

If that looks like hell, that's because IT IS!

(Not bad for a picture shot from a moving car through a windshield, though. The Mickey Mouse electricity pole is a well-known highway landmark.)

Finally, after creeping along for a while, I escaped the clutches of The Mouse and found myself in Polk County, where I used to live. I took a little detour north of Lake Alfred on some roads that I used to cycle when I lived near there circa 1990, just to see if I recognized anything along the route. I didn't.

I drove through Polk City and on into Lakeland, where I got back on the Interstate. But traffic continued to be a nightmare, and it was 4:30 p.m., and I was approaching Tampa. I did not want to get stuck in Tampa during rush hour. So I got off the highway in Plant City and headed south on rural roads through eastern Hillsborough County. 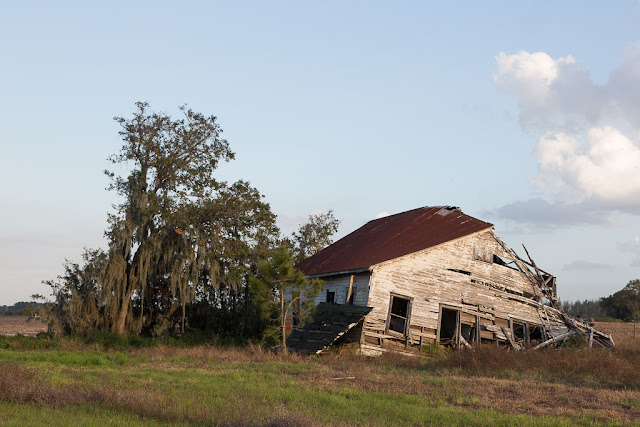 They took me past phosphate mines and farmland to the tiny community of Duette, in eastern Manatee County. (You're getting quite a geography lesson here!) From there I turned west and drove into Bradenton, arriving at the in-laws' around 6:30 p.m.

We promptly went to dinner at a popular restaurant on the beach, where I had to gently defend our claim of a stool at the bar against a woman who seemed shocked that we would want to sit there before moving to a table for dinner. (She seemed to think she should have priority because she was eating at the bar. Dave's dad and I were already standing, but his mom uses a cane and I wasn't about to give up her seat.) Very weird.

Here I am, already getting into arguments with the locals!
Posted by Steve Reed at 11:23 AM