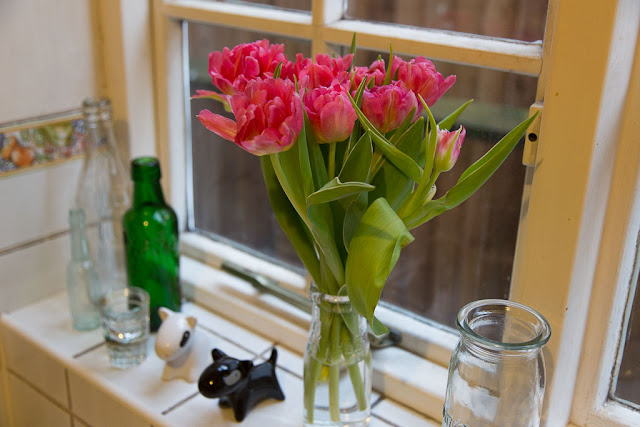 Dave and I bought these tulips at the farmer's market on Saturday. We needed a bit of spring color around here, and now they're livening up the windowsill in the kitchen. I love the combination of daylight from outside, yellow light from our overhead fixture and the pink flowers in that picture.

Yesterday was part two of my root canal saga. I went back to the dentist to get the job finished and the tooth sealed with a filling. As it turned out, he didn't put on a crown right away -- he said he wants to wait six months and make sure the root canal is sound.

It was an easier visit than the previous one, but I still had to get more Novocain and wear that rubber dental dam, and he had to re-drill the channels in the tooth because, when he probed them, I still felt some pain in one -- he thought he might have left a bit of nerve behind there. Remember how he had equipment problems on my previous visit, with his drill initially not working quite right? Well, the same thing happened again.

"Do you think we need a new one?" he asked the hygienist.

"YES!" I replied from the chair.

Anyway, he eventually got it fired up and all went well. Now I have a "provisional" filling, which is not meant to last forever but apparently will go a few years if need be. He said he would reassess when I come back for my regular checkup.

On the walk home, I picked up a couple of CDs from the "free stuff" pile outside the library. One is by a group called Tortoise and it's an interesting sort of mellow electronic rock. The other is a collaborative album between Sergio Mendes and an assortment of hip-hop artists, and I'm digging that one too, surprisingly. I'm usually not much of a hip-hop fan, but knowing these classic Mendes songs, I can appreciate this new take on them.

At work yesterday I spent time organizing our archive of old yearbooks. (Part of our continuing effort to clean out the conference room.) I realized with horror that someone has been cutting pictures out of many of them. Argh! Who DOES that?! (I think we know who, actually, and he means well -- but I don't want to publicly point fingers so I'll say no more.) I separated out the damaged ones and I think we'll lock up the others to protect them.
Posted by Steve Reed at 6:42 AM