Back in London (More Mindfully?) 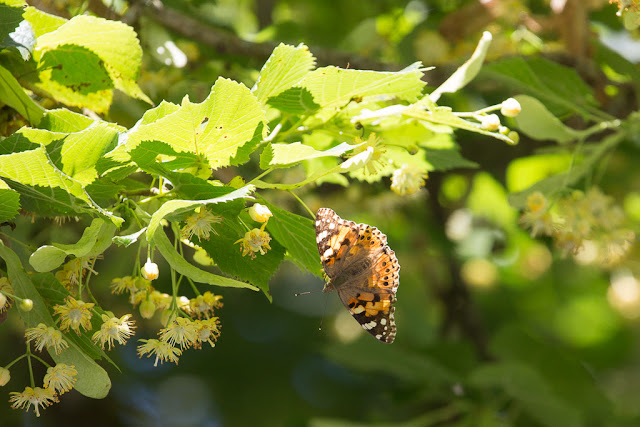 One of the blooming trees outside the main building of the Buddhist Center was positively teeming with butterflies every morning. Here's one of them -- a painted lady, I believe. I had to stand there for quite a while before the butterfly cooperated and opened its wings for a picture!

Well, I'm home now. I got back at about 10 p.m. last night, having done the same train-train-train-bus combination that got me to Waldbröl, but in reverse. The traveling wasn't hard, but it was long. We didn't even get started until mid-afternoon and we'd all been up since 5:30 a.m., so after finally trudging up our street and opening the front door I had just enough energy to greet Dave and Olga, eat a peanut butter sandwich and unpack my bag before falling into bed.

Now I'm lying here in the morning stillness, drinking a cup of (real, brewed) coffee with both Dave and Olga snoring next to me, and it feels wonderful. I can't wait to take a shower and get to work on my laundry. Doing laundry after a trip always feels so satisfying to me, like hitting a "restart" button.

I'm also looking forward to reacquainting myself with the garden. Several things have bloomed or changed in my absence. Remember the poppy that sprouted at the edge of one of our flower beds? Well, it got broken off a few weeks ago -- probably by Olga -- and I put the stem in water, hoping it would survive just long enough to bloom. In fact, it had a purple flower while I was away -- Dave took a photo and sent it to me. 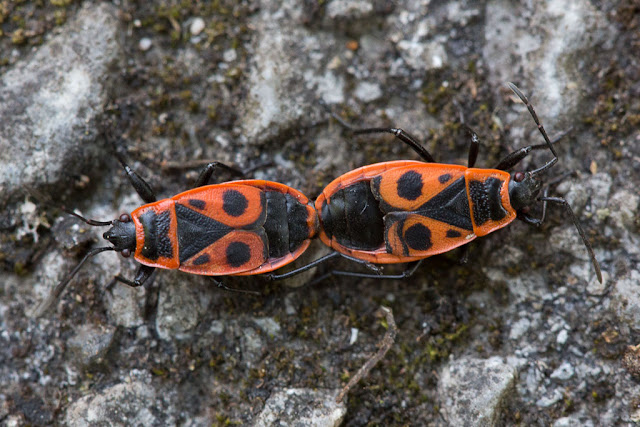 Here's another bug I saw frequently in Germany. This is called a firebug. (I had to look it up.) They were common under certain trees, and every day during walking meditation we'd see them on the ground -- I was always afraid they'd get stepped on, and I'm sure some did, but if you're a tiny insect and you have to be surrounded by gigantic people with gigantic feet, I suppose your chances are much better if they're Buddhists!

As I said in my last few posts, I found the retreat to be very positive overall. There's always part of me that wants to get the heck out of there, particularly at the beginning and at the end -- this was true when I did Zen retreats years ago, too. Part of me always resists, wanting my human comforts and my routines.

But once I settle into the rhythms I usually find some valuable insights, and I think I had them this time, too. I have things to think about and to practice with -- some internal things, I mean -- as well as a renewed appreciation for moving just a bit more slowly. We'll see how long that lasts! The challenge will be to maintain those realizations in some form once the afterglow of the retreat has worn off.