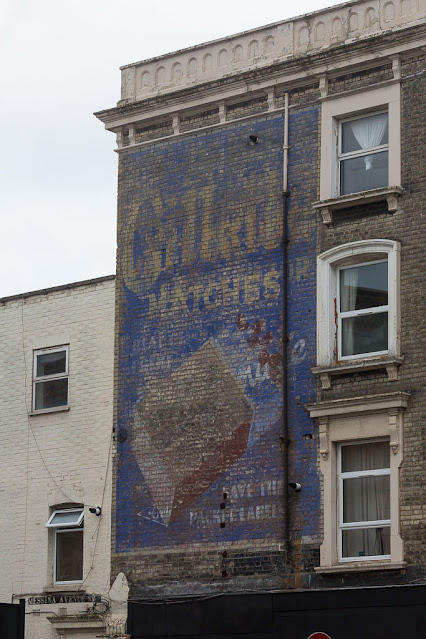 This old "ghost ad" is on the side of a building on Kilburn High Road. I always thought it advertised Gillette matches, which seemed a little weird to me, as I didn't know Gillette ever made matches. Turns out, it's a couple of ads layered over each other.

One is for Gillette safety razors. Atop that is a slightly newer one for Criterion matches, which apparently came from the Soviet Union. There's an interesting in-depth look at these old ads, with background on the companies, here. (I love the Internet; there's a blog post for everything!)

I had the weirdest dreams last night. I dreamed I was a reporter again, back in Florida, and Joe Biden was in town. I had a phone conversation with him that was a little disjointed, and then when I met him the next day he seemed positively doddering. He actually had trouble standing up, and needed help from two assistants, who reacted ruefully to the fact that I was going to mention it in the paper. For the record, I do not for a second buy into the right-wing propaganda that Biden is incapacitated or senile – but I was reading some right-wing message boards yesterday, just to see what the loonies were saying, and I suppose their paranoia seeped into my brain. See how insidious misinformation can be?

Then I had a dream that Dave and I were both being held captive by the actor J. K. Simmons, or more accurately, a deranged character played by him; he kept threatening us with a big knife and I had to somehow get the knife away from him and hide it in a box in his closet, which I did successfully.

It's very unusual for me to remember my dreams, and these were quite detailed. I still remember my dream conversation with one of faux-Biden's assistants, and the expression on her face, which was perfectly calibrated between wincing embarrassment, pleading and resignation. (When I was a reporter I saw that look a lot.) It's amazing that our brains can create such detailed images, in this case of a person I've never seen in real life, at least not that I remember.

When I tell Dave about this dream he's going to forbid me from reading those message boards anymore. Ha!

I was looking at them because I was curious whether Trump's supporters were finally giving ground on the idea that he'd won the election. The answer is no. In fact, they're more convinced than ever that it's being stolen, and many of them are calling for armed resistance if Trump's legal machinations don't work.

My mom used to say the Civil War wasn't really over, and I never knew what she was talking about. But she was right. These people are a subset of the electorate who are unhappy with progress, unhappy with having black leaders (a feeling they may or may not acknowledge themselves), unhappy with change, unhappy with any interdependence on other countries or cultures. They rant about how Biden and Harris are radicals and communists being controlled by China. It's complete insanity, but they believe it. Unless they're Russian bots, which is always possible. 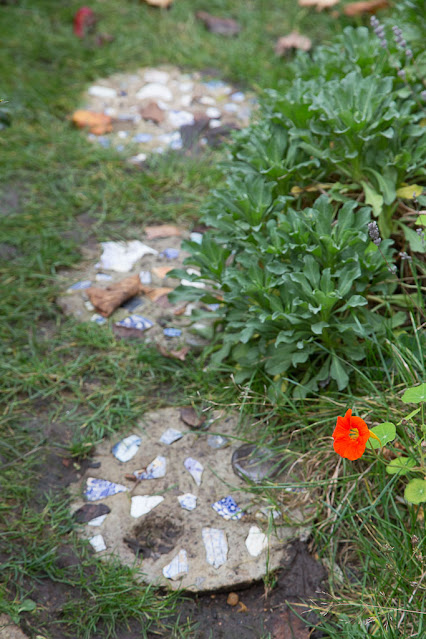 Anyway, so as not to end on that depressing note, here's a picture from our garden (taken Nov. 26) of what may be our last nasturtium of the year. The plants haven't frozen back yet, but it's only a matter of time. Fortunately they're pretty durable and they've reliably re-seeded for several seasons, so we'll probably have more when the weather warms up again.

Humans may be crazy, but the Earth just plods along, enduring.
Posted by Steve Reed at 6:29 AM