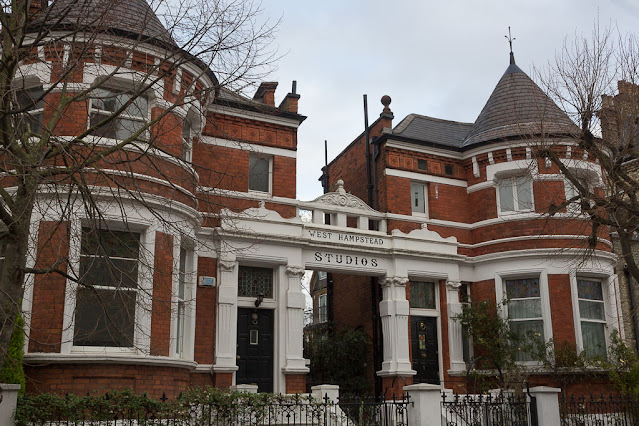 I love this little apartment building near the tube station in West Hampstead. Isn't it beautiful? In fact, I've probably blogged pictures of it before. I want to know what those round rooms look like in the turrets. They'd be a great place for a reading chair, and some houseplants, but you probably couldn't hang a picture.

The cabinet guy was a no-show yesterday. Dave and I were home all late afternoon and evening and never got so much as a phone call. Finally, around 6 p.m., the management company sent an e-mail saying our appointment had been rescheduled to Dec. 10. Argh! They act like we have nothing better to do than sit around the house.

(Which frankly, because of the lockdown, is true. But that's not the point.) 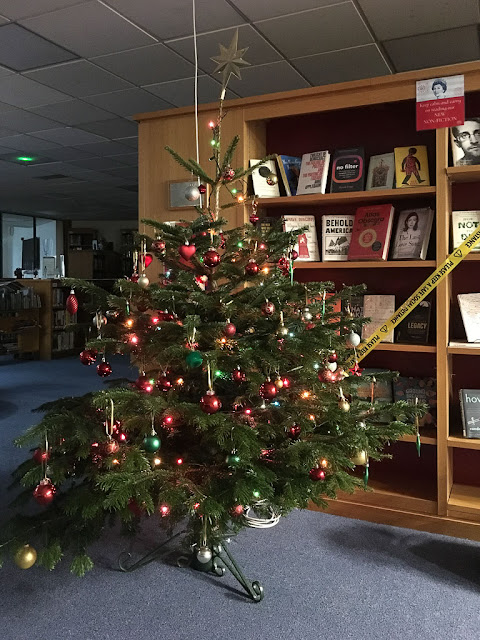 Our library Christmas tree has been decorated. We got a group of students to do it, and they completed the task in record time. It's a pretty conventional tree, as trees go, but at least it's finished, and I didn't have to hang all the baubles for a change.
See the crime-scene tape over the bookcase to the right? We've had to tape off all our shelves to remind people not to touch the books -- which is just sad for a library. They can look but they can't touch, because of Covid. (Even though now there's some suggestion that the virus isn't spread effectively by surfaces.) If they want a book they have to come to me and I'll get it for them with my gloves on. 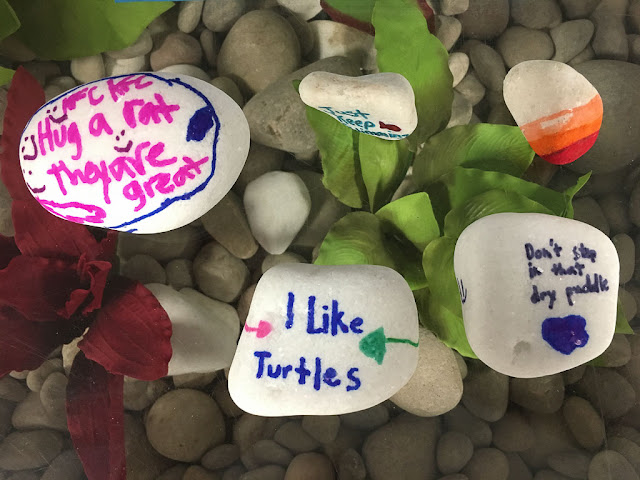 I passed this little display yesterday in the Middle School office. Apparently some kids decorated pebbles in their homeroom class. I got a kick out of the messages -- the little one at the top says, "Just keep swimming," with a picture of a fish. My favorite is undoubtedly the one at left: "Hug a rat. They are great." 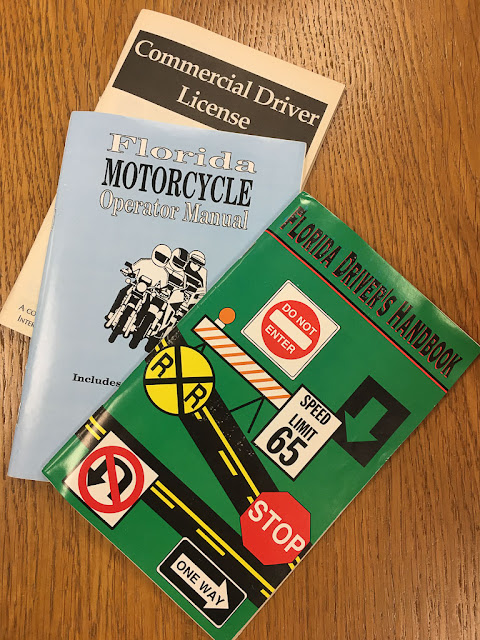 Some of you asked what I did with the antiquated Florida driving manuals that were donated to the library along with that 35-year-old issue of the Miami Herald I mentioned a few days ago. I still have them, for now, but they're not very interesting. A driving manual is boring even when it's brand new and pertinent. An old driving manual is even more boring. I'll probably recycle them.

Finally, I have to link this fascinating article from The New York Times about insects that mimic leaves. Apparently scientists know little about them, and recently, they realized that two different species of insect were, in fact, the same species. The males and females looked so dramatically different that scientists were confused for years. It's wild, and the accompanying photos are very cool -- particularly the one showing the insects in their native environment, concealed in a tree. Nature is amazing!
Posted by Steve Reed at 6:26 AM