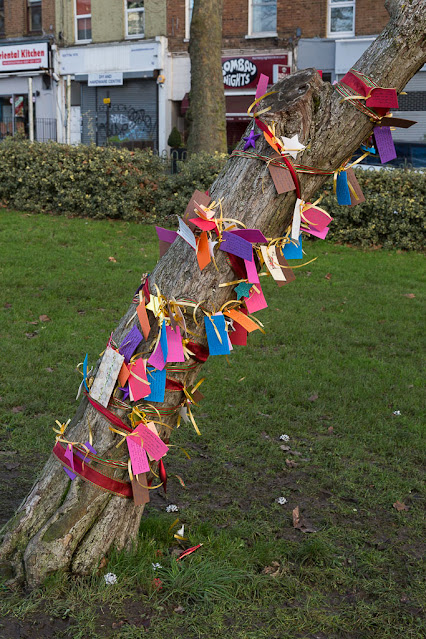 When Olga and I were out walking this week, we noticed this tree at Fortune Green, bedecked with ribbons and handwritten notes to Nazanin Zaghari-Ratcliffe. This tree often serves as a focal point for activities and displays supporting Nazanin, a British-Iranian woman who has been unjustly held captive in Iran since 2016. Many of the notes this time around seem to be about food and cooking, apparently a reference to Nazanin's culinary activities at her parents' home in Tehran, where she has been on house arrest since the spring. People wrote messages about their favorite holiday foods or their favorite recipes. 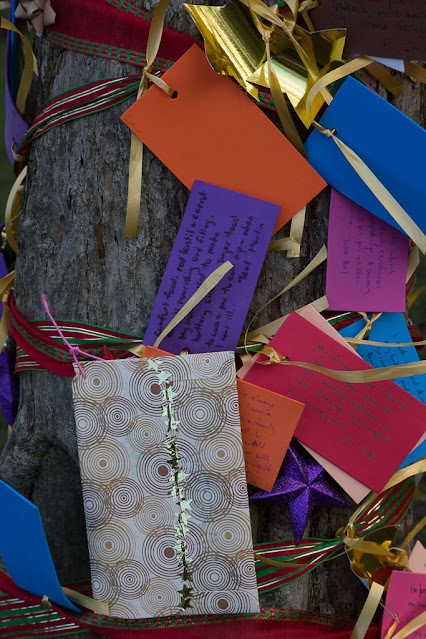 Here's one worthwhile wish for 2021 -- that Nazanin Zaghari-Ratcliffe is freed and allowed to return to her home and family in London. She's basically being held prisoner by Iran as leverage in a decades-old dispute with the UK over money from an arms deal. It's an appalling situation and one that, in my view, the British government should be working much harder to resolve.

I had a pretty quiet day yesterday. I worked some in the garden in the morning, clearing more dead plants and trying to tame some of the overgrowth in the flower beds -- particularly the blackberry vines, which would take over if we let them. There's a lot more to do but I don't want to clear too much now, because insects and other critters could be using the foliage for winter shelter. When we get closer to the spring I'll start pulling out some of the excess ivy and other stuff that's growing along the side fence. (Apparently ivy is an important cold-weather food source for insects.)

I also brought in a few more plants, as the forecast called for temperatures as low as 26º F (-3º C) last night. I'm not sure it got that cold in the end, but still. Dave and I quibbled about his tree fern, which he hadn't taken any steps to protect -- I think he thought it would be OK because we weren't going to have snow, and Mrs. Kravitz hasn't done anything (as far as we can see) to protect hers. But I was still worried about it, and after I crankily and dramatically exclaimed, "Fine! Let it die!" he brought it inside. So this was our bedroom last night: 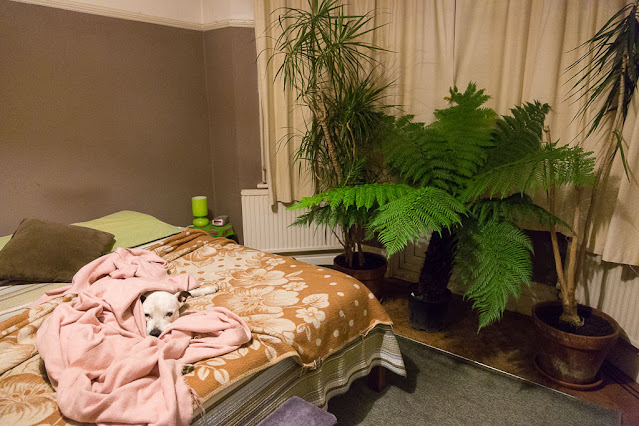 Olga, as you can see, was not impressed.
In the end, as I said, I don't think it got as cold as expected. The coldest temperature I saw on my phone when I checked it in the middle of the night was 30º F. But better safe than sorry. Monty Don, on TV's "Gardener's World," always makes a big deal of wrapping up his tree ferns for winter, but he's out in the countryside where it probably gets colder. I'm just extra cautious because this is its first winter here, and I don't have a good sense of what it can withstand.
Having grown up in Florida, I am very attuned to the dangers of freezes, because there, a hard freeze can be super-destructive. Whereas Dave, growing up in Michigan, is used to brutal winters and the idea of coddling plants is sort of foreign to him -- the only plants he ever had were ones that could handle what nature threw at them.
Now, in the gray light of dawn, I do see a lot of frost out there.

So, yeah, New Year's Eve! Are you celebrating? We have a little bottle of bubbly that we will crack at some point this evening, before we go to bed as usual at 10 p.m. There are no noisemakers or resolutions here. I suggested to Dave that we make Hoppin' John, a traditional New Year's feast in the South, but he's not into that idea because there's not much meat in it. Dave is very much a meat guy. If I point out that he can use bacon, that might win him over. (Another potential barrier: I'm not sure we can get black-eyed peas here, at least not without planning ahead.)