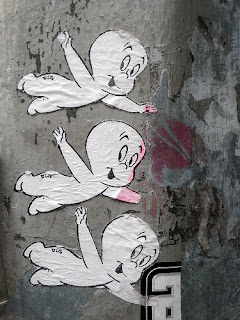 Yesterday was a busy day! I met my friend Stuart for brunch at Pastis, a hotspot in the Meatpacking District that I've always wanted to try. We had a fluffy omelet and incredibly soft, delicious french toast. Amazing.

Then I zipped uptown and met my friend Bill for a matinee of "A Man for All Seasons," starring Frank Langella, on Broadway. It was a great play and Langella was terrific. For some reason, having seen him as a convincingly dark Richard Nixon in "Frost/Nixon," I doubted his ability to portray the noble Sir Thomas More, but he won me over entirely.

Then I went back downtown to Greenwich Village to catch Banksy's "Village Pet Store and Charcoal Grill" installation, which just opened last week. Those big Banksy murals that went up in SoHo, which I wrote about earlier, were part of an effort to develop buzz for this show. It was really brilliant -- "fish sticks" swimming in a fish bowl, a very lifelike leopard made from a coat. Check out the videos here.

Finally, I came home and relaxed in the evening -- read for a while, went to bed early. What a great day!