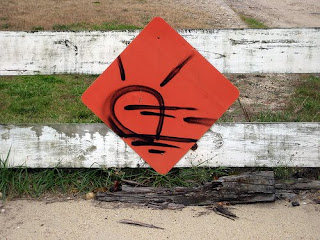 I had a funny experience at the drug store yesterday when I stopped in on my way to work. The line for the cashiers was very long, stretching down one of the shopping aisles. I asked a guy with a cart in the aisle, “Are you in line?” He kind of grunted at me and positioned his cart so it would be more obvious that he was, indeed, waiting. I got behind him.

It was then that I noticed he had a HUGE mosquito hanging off the upper part of his right ear. And I mean HUGE. Apparently the mosquito had the good fortune to land on an area with few if any neurons, because this guy obviously didn’t feel it.

I watched the mosquito for a couple of minutes. It was clearly eating -- it got fatter and fatter, its body redder and redder. I wondered what I should do. I thought about trying to surreptitiously fan it off the guy’s ear, but surely the guy would feel that and think I was up to something. I thought about simply saying, “Hey, dude, you have a HUGE mosquito on your ear,” but then he was likely to squash the mosquito -- which, after all, was only trying to get its breakfast and doing what mosquitoes do. (Plus that would be a mess, because the mosquito was quite full by this time.)

I marveled at the situation. Doesn’t it seem unlikely to witness a mosquito attack in a drug store on Park Avenue at the end of October?

Eventually, the guy moved up to the cashier. I thought she might say something, but she didn’t -- she barely looked up, so I doubt she even noticed the mosquito. Finally, full to bursting, the mosquito flew away just as the guy was getting out his cash.

And that, I thought, was the best possible scenario. The guy never knew he’d been bitten. The mosquito got its breakfast. And I didn’t have to engage a grumpy fellow drug store patron. Problem solved!