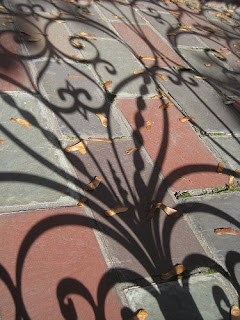 Last night Gary and I went to see Joan Baez in concert at Town Hall, and once again she was terrific. You may remember I went to see her speak several weeks ago, and she played a few songs then. But this was the full concert experience.

She kept up an easy rapport with the adoring audience, and told a few funny show business stories -- about meeting Johnny Cash, for example. She said: “The first time I met Johnny he was with his first wife, and that’s how he introduced her.”

She also led a rousing audience cheer for Obama.

Here's Joan's set list, a mixture of some old classics and several songs by Steve Earl from her newest album, "Day After Tomorrow":

(Photo: Shadow of a porch railing in Bushwick, Brooklyn)
Posted by Steve Reed at 10:46 AM