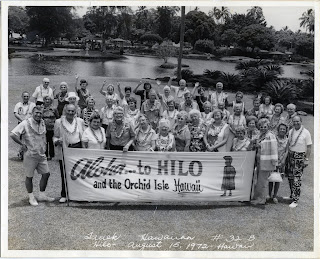 I don't have anything much to write about today, so I thought I'd post this photo of my Aunt Laurita and Uncle Rudolph's tour group in Hawaii in August, 1972. (I've had this photo on Flickr for a while, so apologies if you've already seen it.) This picture just cracks me up...the sunglasses, the hairstyles, that one anonymous teenager in the back row. (Click on the pic to see it in great detail!)

Aunt Laurita and Uncle Rudolph are on the far right in the second row -- Uncle Rudolph (who was really my great uncle) has white hair.
Posted by Steve Reed at 2:45 PM