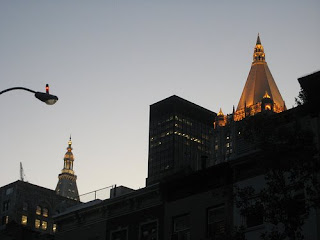 This is one of my favorite views -- the tops of the old Metropolitan Life tower (left) and the New York Life tower from outside my building. When I step onto the street and look up, this is my view. It's especially nice at night when the buildings are lit.

The Metropolitan Life tower was built in 1909, and sometimes it's lit with colored lights. But it's a noble looking building and the colors make it look tawdry; plain white light suits it better. Last I heard, it was supposed to become condos, though I'm not sure that's still the plan.

The New York Life tower is prominently featured in the company's ads. It was built in 1928 on the site of the old Madison Square Garden, which subsequently moved across town. It's still in use as an office building.

I'm reading "Slaves of New York" by Tama Janowitz. I read it when it first came out in the mid-1980s, and I loved it -- it's one of the few books I've saved all these years. No question it fed my interest in New York, which I hadn't even visited at that point. Now, living here, I thought it would be interesting to read it again. I just finished a story in which a woman looks at an apartment on Third Avenue in the 20s -- and I thought, "Hey! That's MY neighborhood!" (Her apartment sounded a lot nicer than mine, though!)
Posted by Steve Reed at 12:32 PM