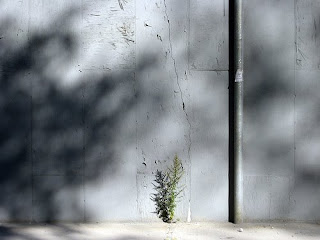 I watched the presidential debate last night. It’s the first debate I’ve seen, since I don’t have a television -- I went to a friend’s house and watched it there. McCain seemed awfully tightly wound.

I’ll be glad when this election is over. I’m not sure why the selection of our national leader always has to be such a toxic, soul-killing process. But it really is painful to watch and read about candidates attacking each other, not to mention the vast amount of misinformation (and disinformation) swirling around in the heads of voters. I think Obama has done a terrific job of maintaining a dignified tone -- far better than candidates in past elections.

Truthfully, though I do strongly support one of the candidates more than the other, I think we’d be better off with either one than who we have now. So we almost can't lose. (Provided the winner serves his full term in office. Check out this site.)

Anyway, enough about politics. When I was out in Bushwick over the weekend, I found this piece of goldenrod growing up from a crack in the sidewalk. I love goldenrod and its appearance every autumn. This one isn't blooming much yet, but soon it will be shaggy and yellow.
Posted by Steve Reed at 12:14 PM