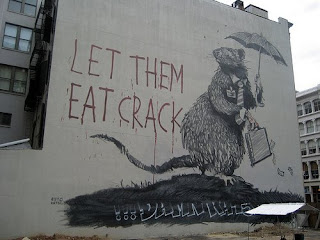 Here’s the second big Banksy mural that’s gone up in SoHo -- he’s on a roll! I went out yesterday morning and shot this, and then walked through Chinatown, which was fun. I really like that area, as long as I’m not in the frenzy of Canal Street.

I also stopped by the farmer’s market at Union Square, and noticed several people selling all kinds of Obama buttons. Funny, though -- there were no McCain buttons anywhere. I have yet to see a single piece of McCain campaign paraphernalia in New York.

I watched “Through a Glass Darkly” yesterday evening, the first film in Ingmar Bergman’s “Silence of God” trilogy. The other two parts are coming up next -- “Winter Light” and “The Silence.” Should be an uplifting week! (Actually, I really like Bergman -- his films are so stripped down, yet so beautiful and haunting.)
Posted by Steve Reed at 11:30 AM