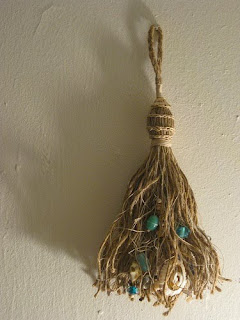 I’ve been a dedicated beachcomber nearly all my life. When I go to the beach, my favorite thing to do is wake up in the morning and walk the tide-line before anyone else is out and about (and before the sun gets too hot). That’s when you find all the best shells, and the birds are out feeding, swooping and diving for fish.

Of course, for any kid growing up in Florida, beachcombing is second nature. My family used to go to Longboat Key every summer, and I walked the beaches there for hours with my brother and step-siblings, finding coquinas and conchs and sand dollars.

In 1993, when I lived in Morocco, I took an overnight trip from my village to Sidi Ifni, a former Spanish enclave on the Atlantic coast. There I found masses of old beach glass, and picked up blue, green, brown and white blobs and orbs, all softly polished by the waves.

In Essaouira, also in Morocco, I found incredible shells and wave-smoothed rocks on the beach near the collapsed Portuguese fortress that inspired Jimi Hendrix to write “Castles Made of Sand.”

As small as my one-room apartment is, I’ve saved these items and more -- shells from Madagascar, Ghana and New Zealand; a smooth piece of pink granite from Montauk Point on Long Island.

So when I recently visited the charity Web site Made4Aid, which auctions crafts by my friend Sally and other volunteers, I was intrigued by her beachcombing tassel. It seemed to match my aesthetic really well -- the natural fiber and the shells and glass. 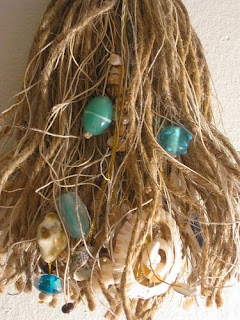 “I learned to make tassels a couple of years ago at a workshop - they're dead easy to make actually,” Sally told me. “I made this one because my niece Amy wanted me to teach her how to make them, so she came over for a bit of a tassel-fest. And having been recently on holiday and beach-combing, that’s why it became a beachcombing tassel.

“The materials are mainly recycled and ‘found’ -- sisal and other threads from car boot sales and charity shops. Bits from the beach in England and Jersey, beads from a shop in Brighton, some beads from old broken necklaces too... and the tiny key is from a box of little keys which was my grandfather’s.”

Well, I couldn’t resist bidding, and I’m happy to say I won my tassel, for $18.20 including postage. It just arrived in the mail yesterday and I gave it a proud place on my wall. I originally planned to give it as a gift, but now I think I might keep it.

I wondered if making it a wall ornament would be depriving it of a more useful purpose. But Sally said she had no special use in mind.

She said, “I see tassels as purely gratuitous!”
Posted by Steve Reed at 9:40 AM