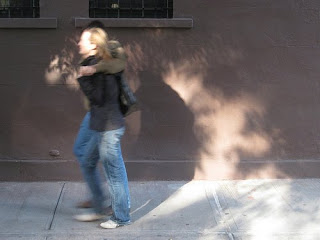 When I was walking in Greenwich Village on Sunday, I found this beautiful spot of reflected sunlight on the sidewalk. I stood in the street and tried to shoot a photo, but it was a busy sidewalk and people kept walking into the frame. Eventually, I decided to include people in the shots.

I've made it a long-term goal to work more with people in my photos, so this was a nice step in that direction. I liked the photo above, especially, because the couple embracing conveys a happy warmth. 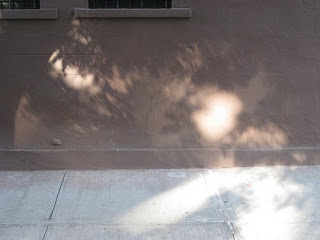 This is the shot I was originally trying for. Now that I've shot it with people, it seems strangely empty without them. 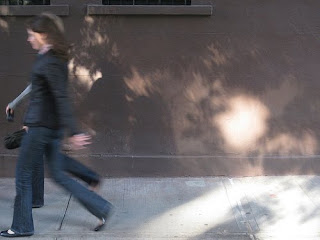 This was the runner-up shot. I like it, but because my camera has a slight shutter delay, the women got a little too far to the left for it to be a really good shot. They shouldn't be so close to the margin of the photo. Still, I like the blurry action!
Posted by Steve Reed at 1:24 PM