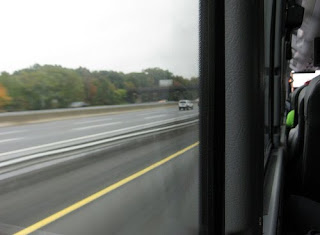 I’ve never written a blog post on a moving conveyance before. This is pretty strange!

I’m on the Bolt Bus, bound for Washington, D.C. Allegedly the bus has WiFi and I will be able to post this when I’m finished. We’ll see!

I’m enjoying the trip, though the weather is gray and dour. Right now I’m on the New Jersey Turnpike, where the leaves are beginning to change and a flock of geese are flying south in v-formation overhead.

You may remember how I feel about Jane Fonda. I’ve always been a fan, so I’m enjoying the book. She is very frank about her evolution as a person, her distant relationship with her father, and the mistakes she made while doing worthwhile activism against the Vietnam War -- mistakes that have contributed to her image among some opponents as a traitor.

I’ve enjoyed her perspectives on patriotism, that patriots are duty-bound to speak out when their countries proceed down a wrongful or destructive path. She also says what my mother always used to say -- and probably lots of women have said -- that the typically male approach to problem solving leads to aggression and fighting, and if women had a greater leadership role, there would be far less war.

Her stories about making movies are terrific, and I’ve been inspired to add several to my Netflix queue. (I’ve seen most of her films, but somehow I’ve missed a few big ones -- “Fun With Dick and Jane” and “Coming Home” among them.)

She also tells great stories about working with Katharine Hepburn during the filming of “On Golden Pond.” Hepburn at one point told Fonda:

“If I’d had a child, and the child got sick and was crying just as I had to leave for the theater, where hundreds of people were waiting for me to perform, and I had to make a choice -- the play or the child -- well, I’d smother the child to death and go on with the show. You can’t have both, a career and children.”

I don’t think her overall point is correct -- and neither did Fonda -- but what a character!

(I just told Dave via text that I’m blogging from the bus. He pronounced me “techno-awesome”! Ha!)

(Photo: My view from the bus. Fare is roughly $40 roundtrip between New York and D.C. Much better than the train!)
Posted by Steve Reed at 2:58 PM