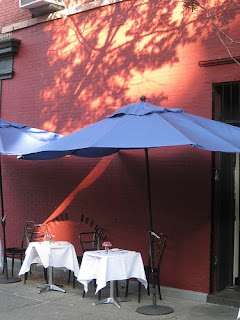 Another busy day yesterday! I went to the Zendo in the morning, and it was refreshing to spend three hours actively practicing once again. I juggled lots of questions I've had lately about how deeply I really want to practice and how much (or how little) I should be sitting. And then I ultimately realized it didn't matter because all those thoughts are just that, empty thoughts. I set them aside and I was just there, in the room, breathing. Bingo!

Afterwards I ran some errands and then went walking in Greenwich Village, where I got some terrific photos. (The one above is my favorite.) The light was spectacular, golden and autumnal, and the sky a deep, crisp blue. I found some interesting graffiti and lots of random street shots as well, which I'll post soon.

Last night, I went with Dave and my friend Jan to a wine, cheese and olive oil tasting event sponsored by the Food Network at a restaurant in the Meatpacking District. It was fun -- we had a great variety of cheeses, from sheep and goat to blue cheese and cheddar. The olive oil, however, was a bit skimpy -- three varieties -- and the wine was even skimpier. We started with a Chilean sauvignon blanc, which was nice, but the next thing I knew we were drinking Yellowtail. Now, I hate to be a wine snob, but I do not go to wine tastings to taste something I can buy at a supermarket, you know?

Ted Allen, from "Queer Eye for the Straight Guy" and now a host on the Food Network, was there. He was billed as one of the attractions, but he pretty much just mingled -- he didn't seem to have much of a formal role. Still, we chatted with him and he was friendly and personable, and not afraid to dish a little about his fellow food network hosts. Here we are with Ted.

At the end of the evening I zipped out to New Jersey on the train with Dave, and then back into the city this morning. Tonight, back to New Jersey. I feel like I need to seize every opportunity to spend time with Dave when his band schedule allows!