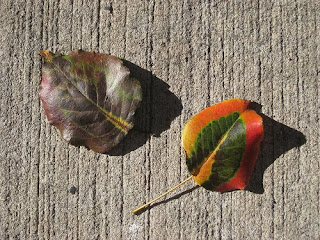 Yesterday was the perfect opposite, weather-wise, of Saturday. Crystalline blue skies and drier, cooler air -- it was a dream of a day. Dave and I had brunch with some friends and then went walking in the East Village, following roughly the path we took on our first date more than six months ago. It was sort of our little way of commemorating the time we've spent together.

We visited two parks -- Stuyvesant Square, where we watched an energetic brown dog stalk squirrels with his eyes, and Tompkins Square Park, where there was some kind of Halloween costume contest for pets. We saw a ballerina dog and a super-hero dog, a dog dressed like a bumblebee (with an owner to match) and a dog in a biplane, a la The Red Baron. One dog had a pair of stuffed gloves stuck on his back and a sequined sash -- I couldn't figure out what that was about. A gay stegosaurus? Anyway, it was funny, but also slightly cringe-worthy. How do the dogs feel about those silly outfits?

Last night I took Dave and his friend Stephanie to dinner. Stephanie watched my cat while I was in Florida on my last two visits, so this was repayment. We went to Resto, a Belgian restaurant near my apartment, and my verdict is that the beer is spectacular and the food is hit or miss. (I went there once before and had the same reaction.)

(Photo: I found these leaves on the way to the gym in the morning.)
Posted by Steve Reed at 9:35 AM