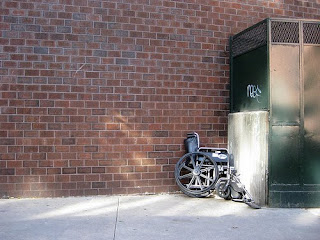 Did you hear about Larry, the 70-plus-year-old lobster luxuriating in a tank at a seafood restaurant in Rockefeller Center? Apparently a columnist penned an article about Larry and won his release. He'll be returned to the ocean near Maine.

I think it's great that Larry's life has been spared. The 11-pounder's alternative, according to the articles, was to be eaten by a rich lawyer or banker for $275.

But it seems interesting to me that we'd spend so much time and ink on a single, old lobster. What about the younger, more sprightly and virile lobsters that have longer lives ahead of them, more reproductive power, more of a future?

The columnist wrote: "Surviving to such an age, having dodged lobster traps all his life, doesn’t he deserve some sort of 'get out of jail free' card?" But does being old, in and of itself, entitle Larry to life any more than any of the other poor clawed beasts in that aquarium?

As Dave already knows, I have a thing about cooking lobsters. I love the way they taste, but I'd free them all if I could. They just look so pathetic, stacked atop one another in those tanks, with their claws banded shut and their eyes and antenna swiveling aimlessly.

I'm no vegetarian purist -- I eat chickens and fish, and I recently ate crab legs at my Mom's house. There's nothing wrong with flexibility and an occasional luxury. But I do try to stick mostly to plant food, and I wish humans were better, as a species, at weighing our needs for survival against the lives of other creatures.