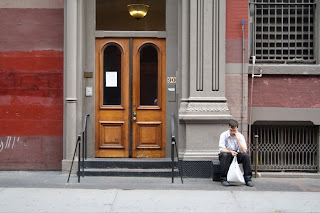 Yesterday was a challenging day. I went into the city to do some photography and see a friend, who unfortunately is in the middle of a break-up with his partner of 16 years. We met for lunch at a Thai restaurant in Chelsea and I heard the story -- at least, the story from my friend's perspective -- and all in all it was a gloomy conversation. I won't get into details, obviously, but it's depressing to think that two people who ostensibly love each other can also be so terrible and hurtful to each other. (Not exactly a newsflash, but also not something I think about very often.)

I did some photography, but the day was overcast and the light wasn't so great. I eventually wandered over to the Angelika Film Center to see "Winter's Bone," a movie about a struggling family in the Ozarks whose patriarch cooks methamphetamine. As you can imagine, not exactly a cheery movie, but a good one.

I came home and found Dave in a state of angst over work. And we're both worried about Ruby, who seems to be getting weaker in her back legs. She has trouble climbing up on the couch and going down the stairs, I think because the fluid in her belly has altered her weight and equilibrium.

And of course, I have a little angst of my own over starting work tomorrow.

Calgon, take me away!

(Photo: A glum fellow sitting on some steps in Soho, yesterday.)
Posted by Steve Reed at 1:36 PM

Ahh, Steve, it must have been something in the air yesterday. It was a humid, heavy day for sure. I am so appreciative that in the midst of your own tough day, you took a moment to comment on my blog in that so thoughtful way. I will be thinking of you on the first day of your new job today! I know it will be good. I hope you enjoy being back on the street reporting. It is such a state of engagement with life!

I'm sorry you had such a rough day. Dr. M has been having a hard time with things going on at his job, so I know what it's like to be the listening post for that kind of angst.

Here's hoping that your first day of work is FABULOUS! Or at least tolerable, which is better than not.

Your day sounds dreadful. Yikes. The work day will no doubt be better than movies about meth and break up stories.

Congrats on your new job. So? How is it?