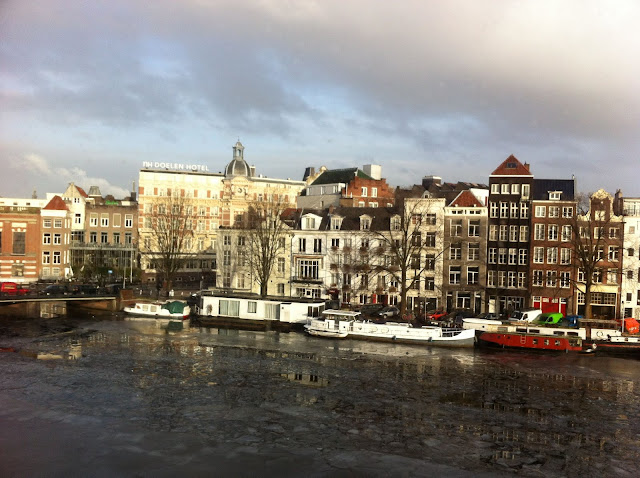 We've made it to Amsterdam, as you can see above. That's the view from our hotel room, which has been recently renovated and smells of new carpet and latex paint. I suppose that's a good thing, since it lessens the likelihood of bedbugs!

Actually, we're happy with the visit so far. We had some drama getting here yesterday when a bomb scare at the Amsterdam airport delayed our flight departure from London. We were concerned because we had tickets for a performance of the New York Philharmonic in Amsterdam last night. But as it turned out the plane took off just an hour or so late, and we got here with plenty of time to spare.

The concert, by the way, was amazing. It was held in the Concertgebouw, apparently a fairly legendary hall for classical performances, with unbelievable acoustics. It was definitely one of the best performances I've ever seen live. They did Beethoven's Violin Concerto in D with a guest violinist, Frank Peter Zimmermann, followed by Stravinsky's Symphony in Three Parts and Ravel's Daphnis and Chloe.

We had dinner at a cute neighborhood restaurant where the proprietor, unbidden, brought us a candle for "more romance." And we finished off the night at a downstairs bar with a pint of local lager, Jupiler, which had me immediately ready for sleep.
Posted by Steve Reed at 8:30 AM