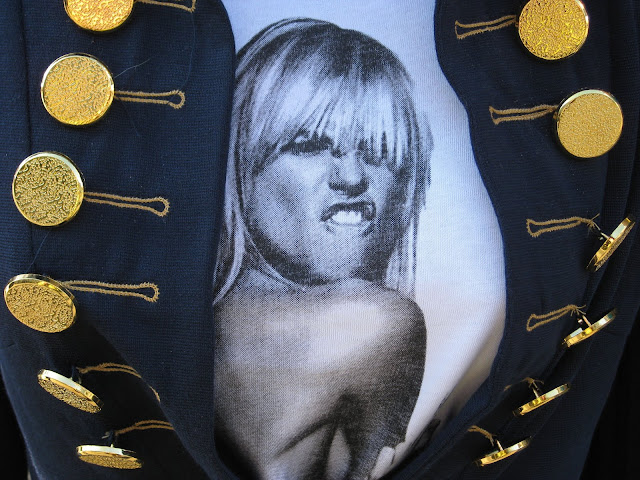 Who is the woman on this shirt?

It's not a trick question. I honestly don't know. The shirt is very popular (or at least ubiquitous) in the shops up and down Portobello Road. You can't see the whole image here, but the woman is standing in a pair of jeans with her naked back to the camera, flipping off the photographer.

Maybe it's no one famous -- just a catchy image -- but I immediately assumed it to be a celebrity. My first thought was one of the Spice Girls, but given their kid-friendly images, it seems unlikely that they would allow themselves to be photographed doing something quite so crass. (Even Scary Spice.)

Then I thought it might be Patsy Kensit, the erstwhile actress and wife of one of the Gallagher brothers from Oasis, since both she and they had reputations for bad public behavior. But I'm told by British friends that it isn't her.

So now I'm stumped. I like the way she snarls from between the brass-buttoned lapels of that jacket, though.
Posted by Steve Reed at 9:07 AM