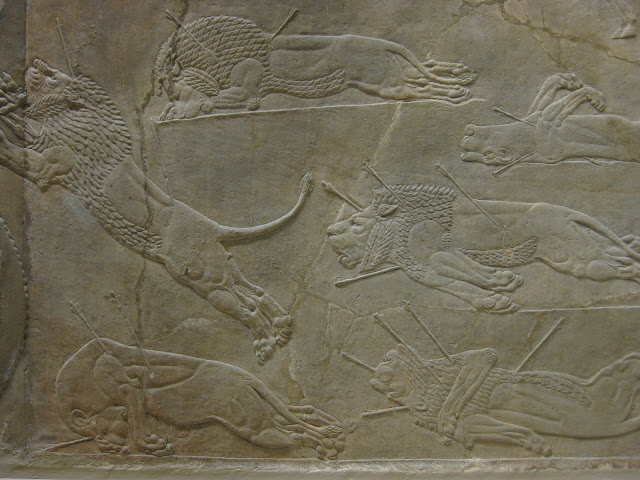 I went to the British Museum yesterday, primarily to see the Elgin Marbles, those controversial pieces of the Parthenon that the British removed from Greece more than 200 years ago. (The Greeks want them back.)

But of course I wound up wandering around the museum checking out other interesting artifacts, and I was particularly struck by this Assyrian sculpture from 645-635 B.C. It depicts the king Ashurbanipal hunting lions -- skewering them with arrows as they are released into a confined arena.

"The hunt scenes, full of tension and realism, rank among the finest achievements of Assyrian art," read a placard posted beside the sculptures, which served as stone paneling in the king's palace at Nineveh. 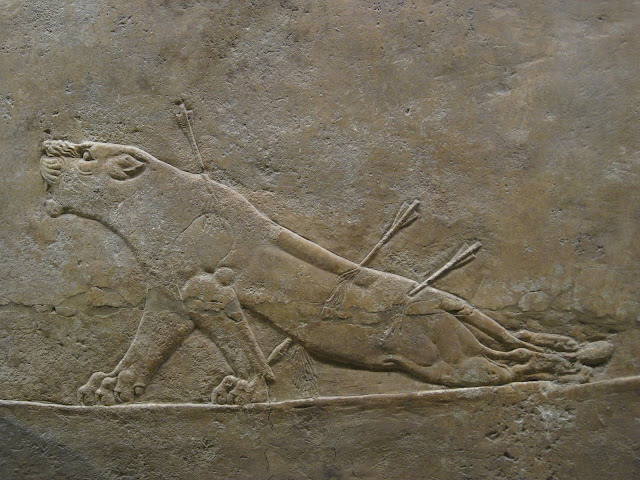 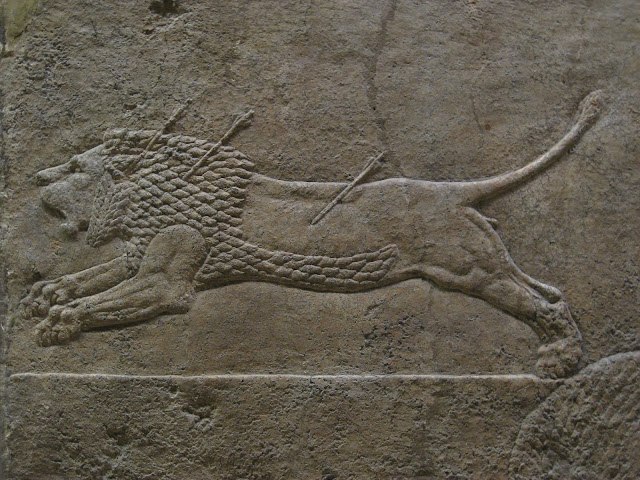 Apparently after numerous years of ample rain, lions were especially plentiful in the hills around Nineveh at the time of Ashurbanipal. (This is according to the king's own records.) The lions terrorized the villagers, killed people and livestock, and reduced everyone to a state of mourning. As a result, the king -- as protector of his people -- faced the task of killing them. (In fact, I suspect he enjoyed the job -- the museum notes that Ashurbanipal was "exceptionally proud of his exploits as a sportsman.")

I don't dispute the artistic merit of the carvings, but how tragic! They show the animals in all their agony, dragging paralyzed limbs and vomiting blood. The poor lions, turned to pincushions in an enclosed space by an egomaniac king!

Elsewhere in the museum, I found the medieval British Tring Tiles, which depict an imagined childhood of Jesus. They show children teasing or taunting Jesus only to be struck dead, and other parents hiding their children so they won't play with Christ and meet a similar fate. Now that's an effective way to deal with a bully! Go, Jesus!

As for the Elgin Marbles, they weren't quite what I expected. They're mostly friezes, or wall-mounted carved murals, and I thought there would be more freestanding sculpture. (Alas, much of the sculpture on the Parthenon was blasted to pieces by a gunpowder explosion in the late 1600s, so the remaining freestanding pieces are mostly fragmentary.) While interesting and remarkable given their age, the marbles are badly damaged and worn. As for who should have custody, I take no position.
Posted by Steve Reed at 6:25 AM