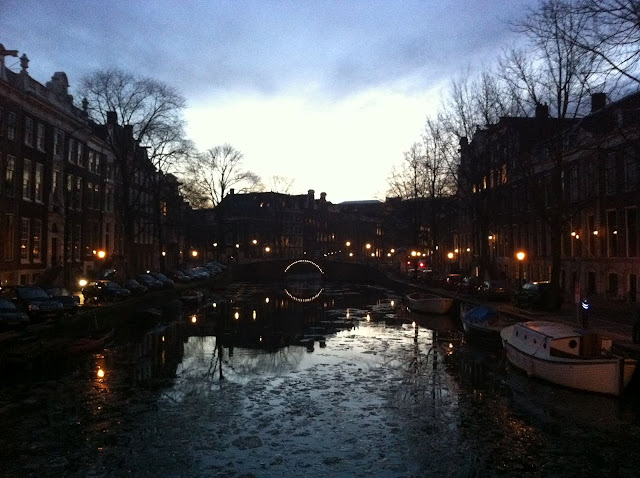 We're departing Amsterdam this afternoon, after a terrific visit. Yesterday we spent the morning at the Van Gogh Museum and the afternoon on a boat tour of the canals. We finished off the day with dinner at a local restaurant called "Roots," where I had venison carpaccio and cod.

I've certainly been experimenting with food on this trip, from veal at De Kas to venison last night. I would normally never eat veal, but it was the one entree on the prix fixe menu that evening, and I figured, well, when in Rome...

One of my readers asked about the red light district. Yes, we visited -- you sort of have to, after all -- but I found it depressing. Maybe I'm imposing my own ideas about what it would be like to be a prostitute on the women involved, but when I look at them, standing in those glass boxes, I can't help but think they'd rather not be there.

I have enjoyed the open atmosphere of Amsterdam, though. It's certainly a gay-friendly city, and it's been nice to be able to show affection with Dave without wondering whether we're upsetting people or violating community standards!

We never did take advantage of a "coffee shop," at least not for anything other than coffee. I felt like I'd rather spend our short amount of time seeing the sights, the art and the culture than getting wasted. I'm just not 25 anymore, you know? But we got a sense of how it all works from visiting the coffee shop and watching everyone else. I do think the Dutch have it figured out pretty well. I'd like to see the states legalize cannabis, to help eliminate the criminal element and earn some tax revenue.

(Photo: Yesterday evening on one of the canals.)
Posted by Steve Reed at 9:04 AM