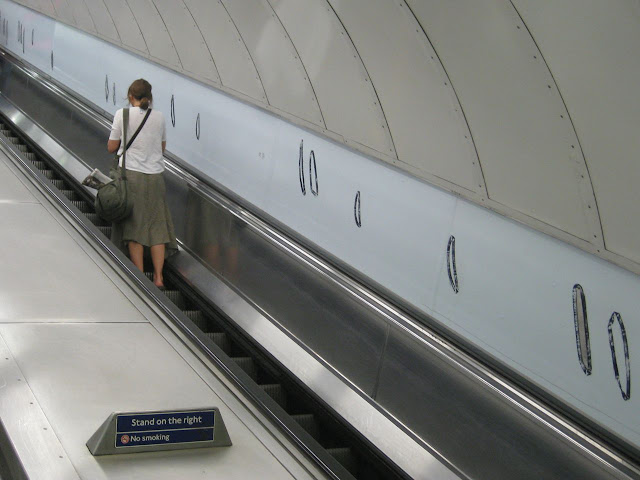 Funny story: For a couple of months now, the walls along one of the main escalators in our tube station have been studded with these odd, random black blobs.

Normally, this is where advertising goes. So Dave and I naturally assumed this was some kind of transitional phase -- maybe the maintenance crew came in and tore out the old ads before putting up new ones.

"It's adhesive," Dave said dismissively of the black blobs.

The other day, though, I began thinking these blobs had been hanging around a while. And sure enough, when I looked more closely, I could tell they were in fact black patterns printed on vinyl. I looked around the station and found a sign noting this is a work of public art by Alice Channer, titled "Hard Metal Body." 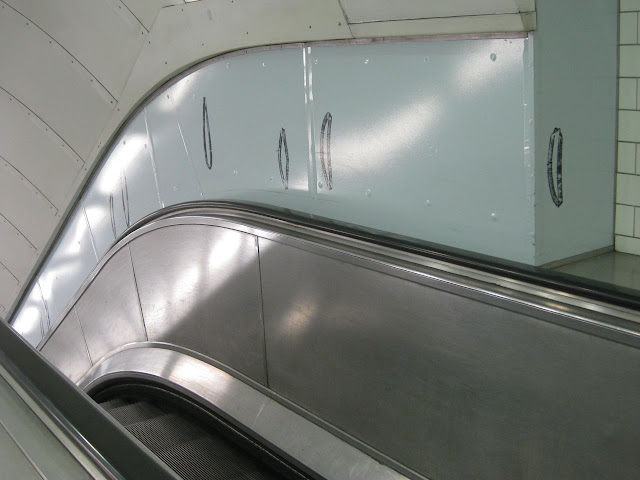 The blobs, according to the artwork's special page on the Transport for London web site, are actually imprints made by inking the elastic waistbands from clothing. According to the accompanying explanation, the artwork "expresses Channer’s desire to inhabit and communicate with the industrial surfaces of the tunnel. She attempts to set up an exchange between her own soft human body and the cold metal surfaces of the tunnel. This is achieved through an indirect reference to her human body in the form of the stretchy clothing that we usually wear close to our skin."

I like art, and trying new things, and I support the idea of public art. I want to appreciate this work and its cool metallic starkness. But Dave is right -- those blobs do look like adhesive.
Posted by Steve Reed at 6:54 AM

This made me laugh. Sometimes, art is a big, huge joke, no?

This is the kind of art that gives art a bad name. Someone somewhere is hoping she didn't get a GRANT to do this (I'm imagining that that person looks like Archie Bunker - ha!).

I love both of these photos! The art? Not so much! Very odd. Do the blobs look any better up close?

This is exactly the sort of "art" that we have so much trouble with as Erik approaches his third semester at art school...Does the art stand alone without some extraordinary (bullshit) artist's statement? Not really...

It's a pile of crap.