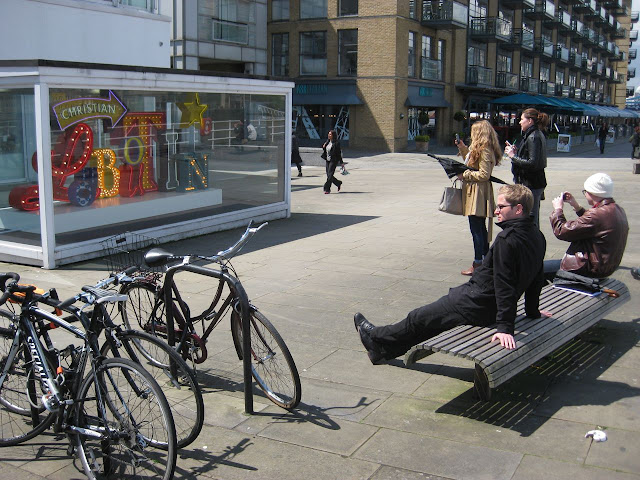 I've been hearing raves about the London Design Museum, so I decided to go on Tuesday. It's in Shad Thames, on the south bank of the river, and when I got there I discovered I'd missed the recent Terence Conran show. Alas.

I found instead an exhibit focused on Christian Louboutin, the famous French shoe designer. Now, I do not care one whit about shoes. I own about five pair, and as far as I'm concerned even that's too many. Women's shoes are even more of a mystery. But I decided to check out the show, since, well, that's what there was.

It wasn't bad, and I imagine if I'd been a shoe person I might have loved it. There were lots of schoolgirls running mad, apparently on some sort of class trip, and although I suspected I would be the only man, a couple of others were also wandering around. My conclusion: If I were a wealthy drag queen, I would wear these.

I also checked out an exhibit of design award winners, the most noteworthy of which (in my book) was  the Mine Kafon, a giant dandelion-like ball that rolls across minefields and detonates forgotten mines. Designed by Massoud Hassani, an Afghan designer, it's meant to be a cheaper, safer alternative to mine clearance, and indeed an accompanying film showed one being blown apart like so many Tinkertoys. Kind of amazing.

(Photo: People seemed to like the colorful outdoor sign for the Louboutin exhibit. I took this during the approximately five minutes of sunshine we had on Tuesday.)
Posted by Steve Reed at 6:19 AM

I'm not much of a shoe fanatic - although I have considerably more than 5 pair :) I never could walk in heels very well, and after my hip issues started I quit trying. I do love those kryptonite heels - but I'm sure I'd find some way to put my eye out if I wore them!