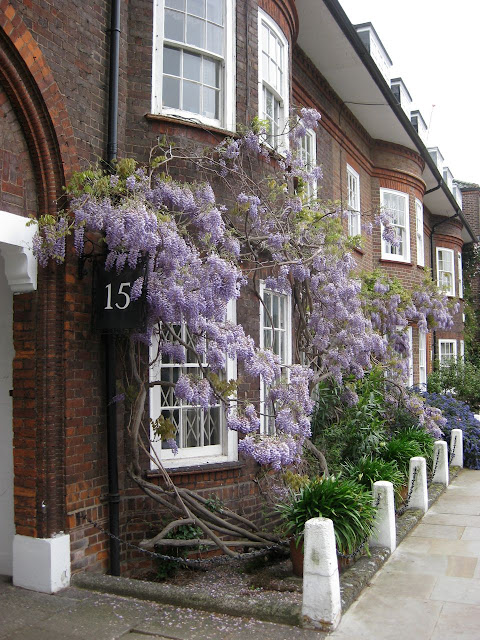 It's wisteria season here in London. I'm enjoying walking past townhouses with huge purple vines clambering up their facades, sweetening the air. 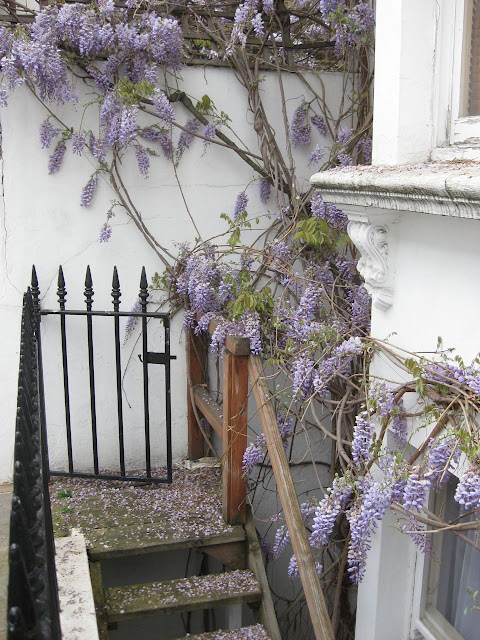 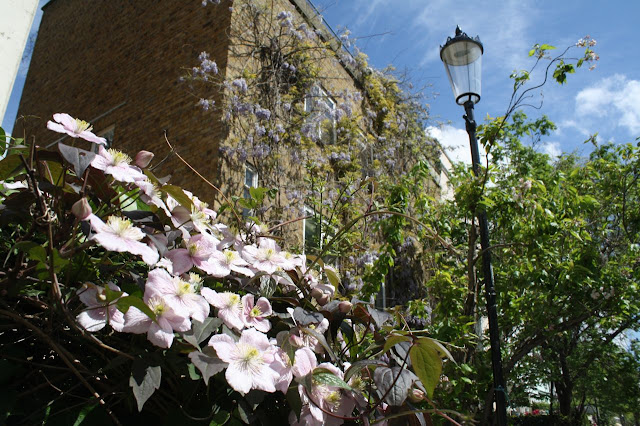 Wisteria (paired with clematis in the photo above) seems like such an urban plant. I always see it in cities. In fact, there used to be a great wisteria vine around the corner from my apartment in New York.

I can only think of one exception, and that was a wisteria vine that grew in a cluster of melaleuca trees overhanging our church parking lot when I was a kid in Florida. One of the streets in the neighborhood where I grew up is named Wisteria, but I never saw wisteria actually growing there.

One of the bloggers I regularly read posted last week about the death of Beastie Boy Adam Yauch -- how the death of one so young serves as a reminder of our own fleeting mortality. I liked the post, derived from the Zen teachings of Dogen, even though I never liked the Beastie Boys. I'm mentioning this only incidentally, not to force a metaphor -- while the wisteria blossoms are fleeting too, at least they come back each year!
Posted by Steve Reed at 8:13 AM

I love wisteria! Our neighbor has a nice big wisteria in his front yard - so it exists in smalltown Ohio :) I haven't seen it blooming yet - I need to keep my eye out.

Yeah, it's distinctly possible that I've only seen it in cities because I spend nearly all my time in cities! That would make sense, huh?

I was really sad to hear about Adam Yauch. Although I'm not a huge Beastie Boys fan, I like some of their songs and own a copy of "Ill Communication," which includes the song "Bodhisattva Vow." It always made me feel just a little bit hip to blast the CD in my car, although I'm obviously the absolute antithesis of hip.

But yes...it's always a shock when a member of your own generation dies. Every death is too soon!

been a stellar year for all things flowering....

Beautiful wisteria...I've never seen that here...I've been working on a Will, so that always brings up stuff about mortality, etc.

Lorianne, I've never heard "Bodhisattva Vow" -- I'll find it online. The only Beastie Boys album I ever heard was "License to Ill," back in the '80s, when my brother owned it. I thought it was terrible. Not my style at all. But I have read that Adam Yauch was a Buddhist and a supporter of Tibet...

Do you know I have always herd so much about Wisteria but have never really been around them. :/ My mother was more of a bouganvilla person.