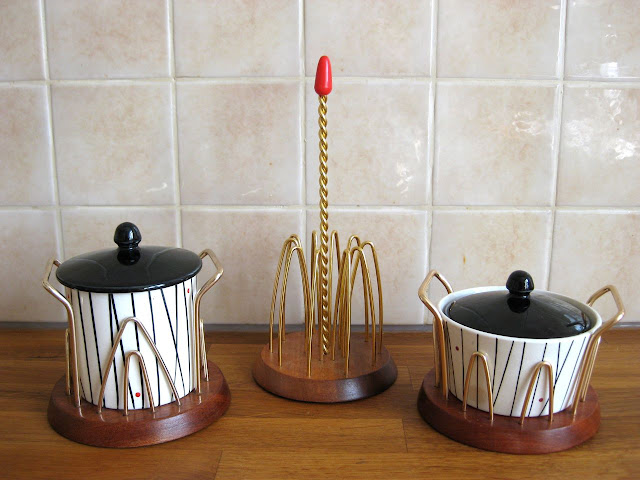 One of my faithful readers asked to see the items I bought online to match my recently purchased egg cups. So here they are! They arrived Friday -- a jam pot (left), napkin holder (center) and sugar bowl (right). The wood bases are all marked Wyncraft, a brand somehow associated with a pottery company called Crown Devon, which made the pots. I'm sure the pattern has a name, but I don't know it. I've only seen it described as "Black Line, Red Dot." So far I've only seen serving pieces -- no plates, cups or bowls -- so I suspect the set isn't very extensive.

I used to collect a lot of mid-century pottery but I sold or gave away almost all of it in the late '90s and early 2000s. This is my first acquisition in a long time -- at least since my vintage creamer from last summer. (Which is still in its place of honor in our kitchen window.) Never again will I collect as much as I once had -- it's too much trouble to store, display, clean and protect -- but I can't resist certain pieces!
Posted by Steve Reed at 6:50 AM

Steve, I love these! Not only are is the pottery itself cool but those bases are works of art! Especially the napkin holder with that red "exclamation" point on the top. I guess that would signify their "red dot."

Thanks for posting the pictures - I love these pieces! I have a friend who has a black & white kitchen - I'll bet she'd think these were pretty cool too.

These are great, though I hear you about the buying...Enjoy.