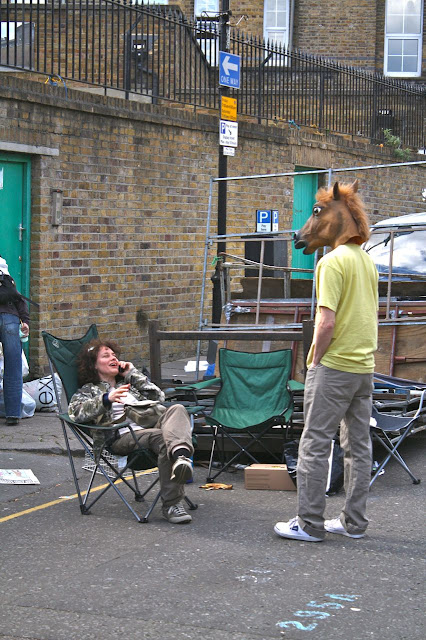 You may remember we've been wrestling with bad cable TV service ever since we moved into this apartment last summer. We put up with it for a while, but it seemed to be getting worse and worse. Our signal was breaking up, the picture was freezing, and our recordings were failing. It was particularly bad on certain channels.

We tried several times to fix it, but the TV company, Sky, refused to work with us because our landlord's name was on the account. So we asked the landlords to cancel the service entirely -- they live in the U.S. and can't really deal with repairing our cable TV. They canceled, effective the end of May.

On Friday I bought a new receiver for Freeview, which is a fancy way of saying we discarded cable TV entirely. We can get more than 100 channels absolutely free, including all the BBC channels, ITV, three or four movie channels, the Food Network and almost everything else we regularly watch. I hooked it up and now our TV, at long last, is operating normally. The picture quality is terrific.

Why did we wait so long to do this? No cable bill! Free television! A good signal! What's not to like?!

(Photo: Portobello Road, on Friday afternoon.)
Posted by Steve Reed at 5:54 AM

The photo sort of freaks me out.

Just what was going on in that photo? Very strange and cool at the same time.

Well now I'm jealous! If we could do that we could get rid of our house phone & the cable bill & save a ton of money.