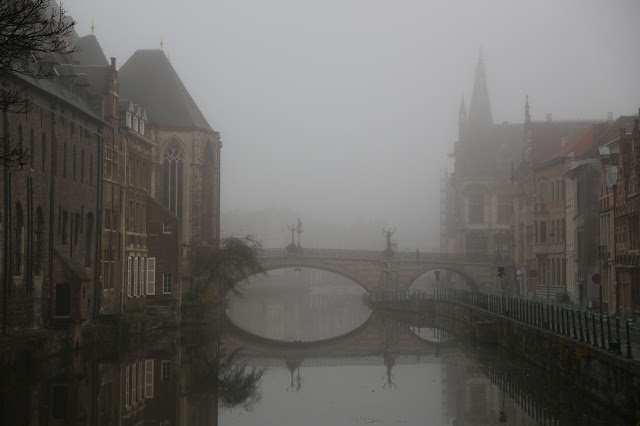 When I first went for a walk in Ghent yesterday morning, the fog was thick and the city peaceful. There was hardly anyone about, even though it was after 8 a.m. I snuck out of our hotel room while Dave was still in bed, and spent an hour admiring the views and taking photos.

Our room was right on the main square near the St. Bavo Cathedral, named for a local saint. (Just how many saints are there, anyway? We saw another church earlier in the week named for a St. Remacle.) It was a strange room, shaped like a jigsaw puzzle piece, and we heard the bells of the tram and every loud post-football conversation passing by. But we liked it anyway. Kind of lent to the atmosphere, you know?

As you can see, Ghent is an ornate city, with lots of spires and gothic churches and centuries-old houses with peaked facades adorned with statuary and stained glass. It's not Disneyland, though -- there's also funny graffiti and some interesting-looking shops and other signs of life. Maybe I'll post some of those photos tomorrow. 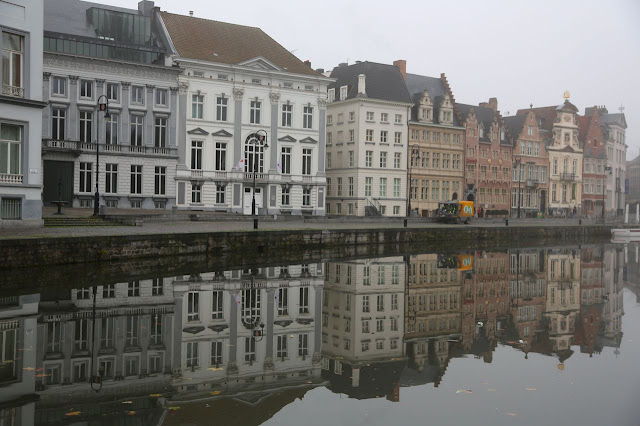 After wandering a bit, I went back and got Dave, and we went to breakfast at, of all things, Le Pain Quotidien. I felt a little guilty about going to a chain restaurant, but the hotel recommended it and we couldn't quickly find anything else. I ate what felt like six pounds of bread in various forms.

We went wandering some more, through a makeshift flea market full of "junque" and lots of local streets, until we reached a suitable cafe, where we parked ourselves and watched the world go by over coffee and, eventually, red wine. 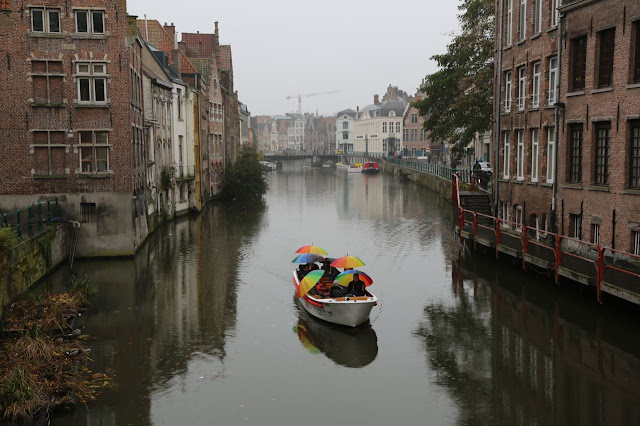 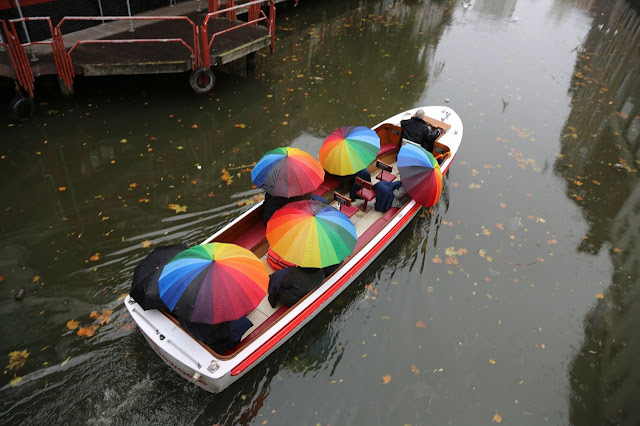 We went to see St. Bavo's, where unfortunately you can't take photos. A multi-panelled painting by Jan van Eyck and his brother, Hubert, is the main attraction -- in fact, the cathedral is free, but a view of the painting costs €4! It's called "The Adoration of the Mystic Lamb" (in French Agneau Mystique, and in Dutch Lam Gods, both of which crack me up), and it's accompanied by an exhausting audio guide that I eventually fast-forwarded my way through.

Finally we had steak frites for lunch at a crowded restaurant on the square with an exceptionally harried but nice enough waiter. We saw St. Nicholas, or Father Christmas, descend on the square in costume, in what a woman at the next table told us is an annual event. He was accompanied by scouts who seemed to be selling small parcels of something (cake?).

By this time it was pouring rain, so we made our way to the train station and our journey back to London. It's good to be home! I'm so glad to be drinking a big mug of coffee instead of one of those dainty little cups the Europeans use. (Their coffee is better, though, I admit.)
Posted by Steve Reed at 6:57 AM