Joe Strummer, and Other Miscellanea 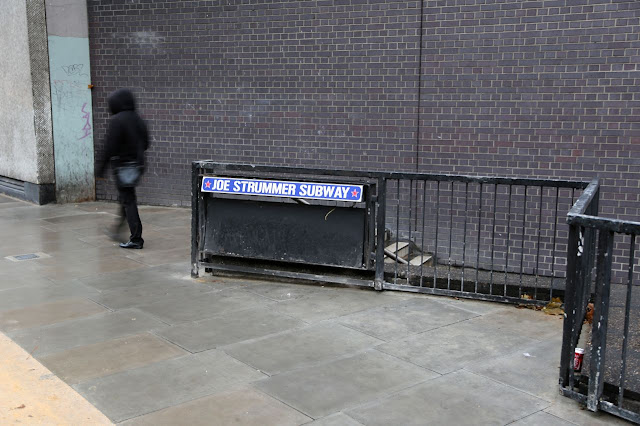 -- Some famous people get roads named after them, some bridges, some imposing public buildings. Joe Strummer, the late guitarist for The Clash, gets a grotty pedestrian tunnel under Edgware Road. Seems like a backhanded compliment.

-- I've finally made my latest photo book public, and you can preview it (and/or buy, if you're so inclined) by clicking on the cover in the widget at right. (Expand the preview to full screen for maximum effect.) You'll only see the first 15 pages, but it's enough to give you a sense of what it looks like. I'm really happy with it.

-- Do you remember a 1980 TV movie adaptation of "Condominium," John D. MacDonald's terrific Florida potboiler? It starred Dan Haggerty and Barbara Eden, among others. I loved this movie as a kid. It is, after all, representative of my favorite genre of films -- the '70s disaster movie! Anyway, I hadn't seen it since the early '80s, but I recently found someone who provided me with a copy on DVD, and I had a great time watching it yesterday.

-- Our friend David left for Paris yesterday morning on the Eurostar. He'll be back again for one night at the beginning of December on his way back home to New Jersey.

-- And finally, Dave and I are off to Belgium today for a long weekend. To Londoners, going to Belgium is a bit anticlimactic, kind of like going to Indiana from Chicago (to use Dave's analogy). But we're looking forward to it. I've been through Belgium but I haven't spent any time there. We're going to Leuven, the hometown of Stella Artois. I imagine beer will be consumed.
Posted by Steve Reed at 6:52 AM