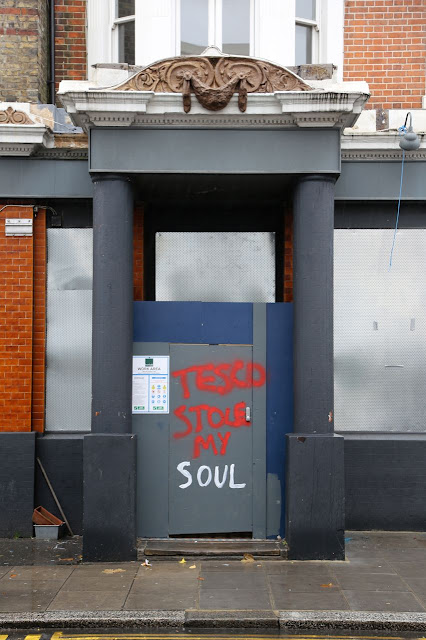 Yesterday I walked past The North Pole pub on the wonderfully named North Pole Road, and -- it's not a pub anymore. It's closed.

Apparently this happened a couple of months ago. I'd never been to The North Pole -- it's not very close to our flat, and since I only occasionally walk through that neighborhood in North Kensington, I didn't know it had closed. Yesterday the spray-painted protests against Tesco caught my eye, though, so I took some photos and did some research on what it all means. 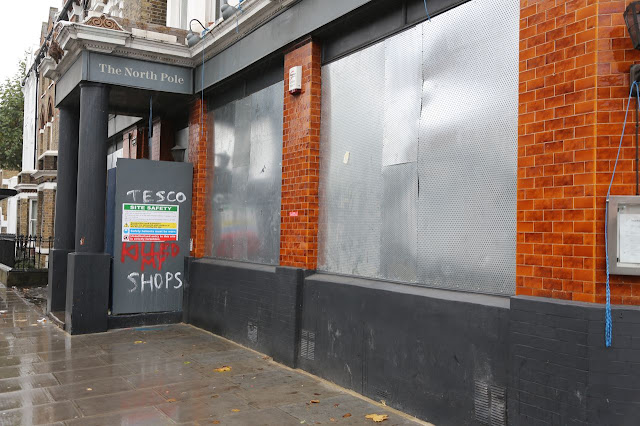 Turns out grocery giant Tesco intends to open a Tesco Express store in the space. This has prompted protests by local residents who are afraid other neighborhood shops will be driven under by the presence of the behemoth. 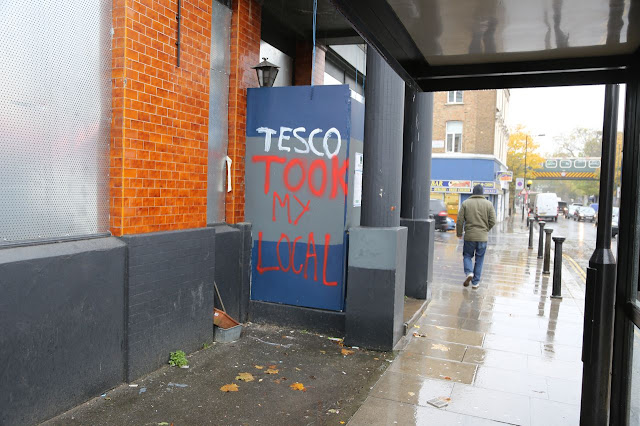 Meanwhile, the building's owners have sealed it up with sheet metal to keep out squatters, who have taken to occupying dead pubs in other parts of London.

People always associate pubs with England, and vice versa, but the sad fact is that many, many pubs are closing. The reasons are myriad -- escalating real estate values and corresponding rents, demographic and social changes, and a sharp reduction in alcohol purchases for consumption outside the home (a 44 percent drop since 2001, according to this report). This "pubageddon" has been going on for years.

In just the year and a half that I've lived in England, I've seen several pubs close. The Stinging Nettle, I noticed the other day, has become a Costa coffee shop. Crockers Folly in Maida Vale was boarded up the first time I saw it, as was The Prince of Wales, between Notting Hill and Holland Park. The Cowshed was already closed when we moved here; it has since been torn down.

I hate to see it happen, but I understand why it's happening. Even Dave and I, who like a pint now and then, only go to pubs once every few weeks. I'm more likely to go to Costa, I confess! People just don't drink as much or as often, and when they do, they're likely to do it at home in front of the television. (I have been trying to get Dave to go to Quiz Night on Thursdays at one of our locals, but getting Dave out of the house on a school night is always, understandably, a challenge. We haven't made it to Quiz Night yet.)

Even reportedly prosperous pubs are threatened because their often historic buildings are so much more valuable as residential real estate.

The world changes, you know? But still -- it's too bad. I hate to see everything become blank and bland and fluorescent. If only I could strike the right balance between patronizing my local pubs and protecting my liver!
Posted by Steve Reed at 6:15 AM