Slow and Steady Wins the Race 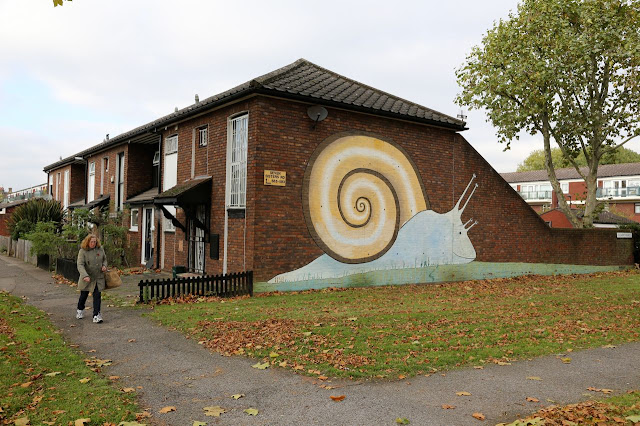 Among the weirder pieces of public art I've found -- this giant snail on the side of an apartment building. Wouldn't you love to know the thought process of the person who conceived this project?

At least it's smiling. It's a happy snail.

I don't have much to report. I took a long walk yesterday along Seven Sisters Road, which has a great name and runs a couple of miles through northeast London. It felt good to get outside after a couple of days of indoor hibernation and work, and the weather cooperated with intermittent sunshine. Got some good pictures to which you will no doubt be subjected over the next few days.

I've seen surprisingly little complaining about Obama's victory. One of my evangelical friends (yes, I have a few) wrote unhappily on Facebook that she woke up early yesterday morning and could not get back to sleep, seeing the election results. "I needed to pray," she wrote. "The dream I had when I finally did fall back asleep was all about praying in the spirit prostrate before The Lord. Was a very intense, sad dream, but as I started praying, situations (and people) began to change for the good of others."

I am just fascinated by that. It's so different from the way I think and view the world. I haven't seen this woman, who I knew in high school, for years and years, and I don't mean to belittle her faith. But it's safe to say that I would never dream about praying in the spirit prostrate before The Lord. I suppose I'm going to hell.

She also posted an article lamenting the lost (presumably Republican?) votes of babies who have been aborted since the passage of Roe vs. Wade.

Another high school acquaintance, who at least appears to live in the same universe I do, won election to the Florida Senate as a Republican. I sent her a congratulatory message and wished her good luck. Even though we may not see eye-to-eye politically I can appreciate personally her victory and how happy she must be. She wrote back, "Thank you Steve, I might be Republican but I appreciate anybody who will learn the issues and vote their conscience whether you're a Republican or Democrat. Thanks again for your encouragement." Which I thought was cool. We need to be able to talk to each other and be friends even if we disagree, politically or theologically -- you know?

Anyway, it's fascinating to see how people react. Most everyone I know had a very, very good day yesterday.
Posted by Steve Reed at 6:33 AM