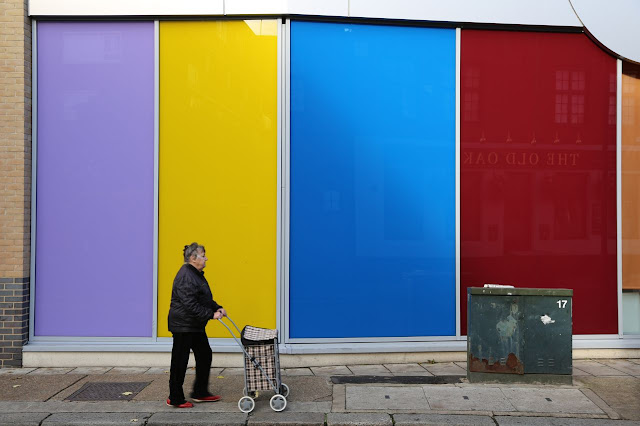 My friend David arrives today for a weeklong visit from the states. Woo hoo! I'm schlepping out to Heathrow this evening to collect him and bring him back to our humble flat. I'm sure he has a full roster of things he wants to do. Probably lots of museums, which will be great -- my Dave isn't a museum guy so I usually have to go by myself.

Now may be the time to catch up with some intriguing exhibits, like the Tate Modern's newest, which looks really interesting. When I was in my 20s I had a big framed poster of the David Hockney painting, "A Bigger Splash," that lends its name to the show. I think I've already seen the painting in person -- maybe at the Tate, which apparently owns it -- but I'd love to see it again.

Of course, David isn't a fan of modern art, so maybe we won't see that particular show. It's just at the top of my own personal wish list. David is a fan of Leonardo da Vinci and other Italian Renaissance painters of his ilk. I guess I could manage that too.

Yesterday I figured I better get in one last photo wander (although I'll certainly take my camera when I'm out and about with David), so I took a long walk through Kensington and Chelsea all the way to the Thames, and then back up to Sloane Square, where I caught to the tube home. Got good shots, like the one above -- although I really need to learn how to use the manual settings on my camera so I can freeze people without blurring them. I like the blurry effect, the display of motion. But I do it all the time and I suppose it might seem a little amateurish, an obvious indication that I don't entirely know how to control my camera.

Have you seen these people who want to secede from the union because Obama won the presidency? It cracks me up. Go! Please!
Posted by Steve Reed at 6:23 AM